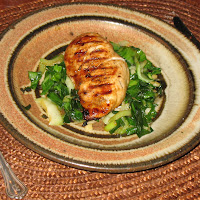 One of Christopher’s favorite choices for chicken - I usually make it with San-J Teriyaki Sauce (or more recently Whole Foods Teriyaki Sauce) but when grilling a large amount of chicken the marinade below would be more economical.

Marinate the chicken (using enough marinate to thoroughly coat chicken and baste while cooking , about 2 T/breast) in store bought teriyaki sauce or teriyaki sauce made with:

Grill or broil the chicken (about 6 minutes per side, depending on thickness), basting occasionally until browned and cooked through. Put cooked chicken on clean plate. Do not return to dish in which it was marinated and be sure to wash all cooking equipment that came in contact with chicken (as well as your hands) with soap.

April 2013: Lesson Learned: We entertained a couple with young children recently and I thought it would be fun to do some drumsticks as well as breasts. I could put foil on the end of the drumsticks and the kids could easily pick them up to eat. The drumsticks and the second joints came off the grill pretty charred on the outside and raw on the inside.  Ed said he took them off before the breasts because they were "smaller than the breasts" and were getting so charred.  It was then, as I put them in the microwave to make them edible that I remembered back when our children were small and we grilled drumsticks and second joints, I always microwaved them first then when they were almost cooked, Ed finished them on the grill.  Note:  Breasts should be cooked to 160 degrees F., drumsticks and second joints/thighs to 180 degrees F.

Posted by cookscache at 4:17 AM