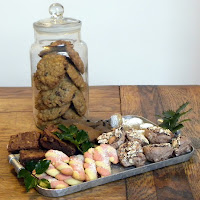 This Christmas we enjoyed some of our old-favorite traditional dishes* as well as some new ones.  The house was full with family which justified huge plates of cookies, some old favorites** along with Chris's Oatmeal Cookies (made with dried cranberries instead of the usual raisins) and Brownies and Alex and Dan's Candy Cane Cookies. 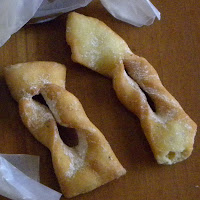 Dan's Scandinavian heritage was recognized by some family baked gifts:  "Fattigman",  and Norwegian Cardamom Christmas Bread. Dan's Mom sent a box of Michigan treats recalling Dan's Marquette roots and Alex and Dan made a rendition of Dan's Mom's Swedish Meat Balls for dinner one night.  These recipes are all special to Dan's family so with the exception of the Candy Cane Cookies were not shared and will not be a subject of future posts. 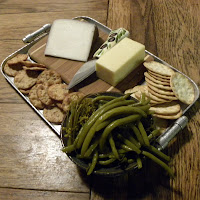 For the first time in many years, I made Dilly Beans this fall and they were a special addition to the holiday d'oeuvres as well as a holiday gift for family.  Alex and I blind tasted the two versions: (1) the way I have always made them and (2) a hot water bath version I made for the first time this year.  Especially given the varying sizes of the beans it was hard to distinguish between the two. Final verdict was, given same size bean, the hot water bath beans may be a tiny bit less crisp. 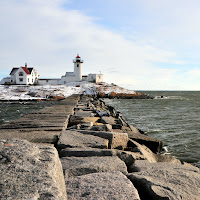 Since Dan had never been to Cape Ann, between Christmas and New Year's we picked a clear (but cold and windy) day right after a snowfall and headed in that direction.  We walked around  Eastern Point and Halibut Point, prominences we are more used to seeing from the water. We stopped at Rockport enroute and then had lunch at Woodman's, the home of the fried clam. Ninety years and five generations later Woodman's is still frying clams in lard. When I questioned this choice, they justified the use of  lard saying lard has no trans fats. 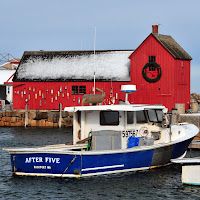 Checking online sources, including Wikipedia,, I found this is true but, "By the late 20th century, lard had begun to be considered less healthy than vegetable oils (such as olive and sunflower oil) because of its high saturated fatty acid and cholesterol content. However, despite its reputation, lard has less saturated fat, more unsaturated fat, and less cholesterol than an equal amount of butter by weight. Unlike many margarines and vegetable shortenings, unhydrogenated lard contains no trans fat." 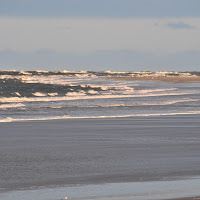 Given the special occasion I just enjoyed the clams and did not point out there are healthier non-transfat options for frying these whole bellied delicacies.

After lunch we drove to the entrance of the Crane Estate and walked up Castle Hill and around the grounds overlooking Essex Bay and Plum Island Sound, then ended our afternoon with a chilly but pretty walk on Crane Beach. 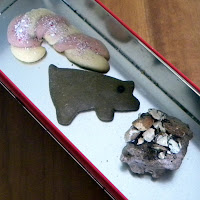 New's Years dawned. We took Alex and Dan to their plane and returned home to an empty house and 3 cookies left  from the holidays.

Posted by cookscache at 3:43 PM

Email ThisBlogThis!Share to TwitterShare to FacebookShare to Pinterest
Labels: commentary, holiday, in season