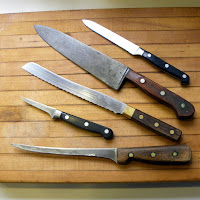 As a 2011 Christmas present Alex and Dan gave me a class in Knife Skills at the Cambridge Culinary Institute.  I thought I was doing fine, they thought I should shelve my trusty serrated knife; I procrastinated. Alex finally booked me for a class held on December 16th. I knew the minute it started it was going to be a good evening. The instructor David Ramsey, was extremely engaging and full of facts I found most useful.  He started with an introduction of knives, urging us to put maximum resources in a good chef's knife (either European or Asian - "an heirloom for your children") then add inexpensive paring and bread/serrated knives.  He recommended a filet knife for those who tend to bone their own chicken and bone and/or skin fish. The small, too short for bread, serrated knife, I had favored (top knife in photo) was not even part of the discussion. Hummm... maybe that's one of the reasons Alex and Dan thought I needed this course.  Ramsey, as he prefers to be called, then talked about knife care, honing and sharpening (use a stone and avoid "gizmos' and machines for the latter) and knife safety.

The six other students and I then followed Ramsey into the kitchen (I think I was the only one over 35).  There we learned not only how to use a chef's knife but many useful tips on how to cut particular veggies.  I'll recap a couple of my favorites below - for the rest and especially knife technique, I suggest a hands-on course; this one if you are in the Boston area. 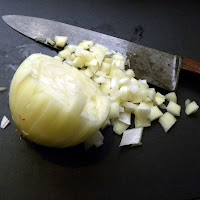 To cube an onion:  Leave the root end attached. This will hold the onion together. Then score the onion in a quarter inch (or what ever size desired) grid cutting toward the root. Finally slice the onion and the slices will already be in the desired cube size. Don't follow my example, cut clear through the whole onion. 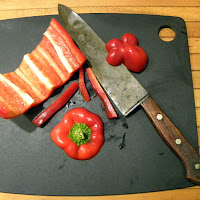 To slice a pepper: If uniform "sticks" are desired, cut off the top and bottom of the pepper.  Then make a cut in the remaining cylinder to open it into a flat strip.  Clean out the seeds and seed structure then slice in strips. Note I am using a (new) synthetic cutting board on top of my wood cutting board. I am careful not to cut raw meat on the wood, but realized from comments made during the course how hard it is to clean a wood cutting board properly.  Better to use a cutting board that can be thoroughly washed, or put in the dishwasher, when cutting food to be consumed raw. 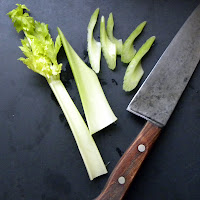 Minimize the presence of annoying "strings" in celery.  Instead of doing traditional "sticks", when cutting celery for crudities, slice celery on the bias into thin oval pieces.

It's been over a month since the class, and I have been using my chef's knife almost exclusively. 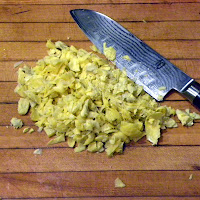 Now I have a really special chef's knife, a Shun 7" Santoku Knife with a Hollow Ground Blade. A gift after a couple years of admiring Christopher's Asian chef''s  knife, Very sharp! And contrary to the addage "it is much easier to cut yourself with a dull knife", I did cut myself, however slightly, before this knife earned the full respect it deserves.  It is awesome :-)

Posted by cookscache at 9:41 AM