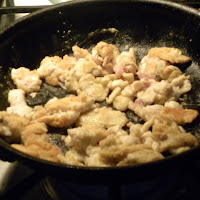 When I posted the Veal Stew/Paprikash recipe in January 2011,  I began to think about browning and whether or not to dredge the meat in flour before browning.  Julia Child's seminal recipe for Boeuf a la Bourguignonne  does not dredge the raw beef in flour. Before sauteing in hot oil and bacon fat, it instructs, "dry the beef in paper towels;  it will not brown if it is damp."* After the beef is browned, it instructs, "Return the beef and bacon to the casserole and toss with the salt and pepper.  Then sprinkle on the flour and toss again to coat the beef lightly with the flour. Set casserole uncovered in middle portion of preheated [450 degrees F] oven for 4 minutes. Toss the meat and return to the oven for 4 minutes more. (This browns the flour and covers the meat with a light crust.)"**

However, recipes in some of my other favorite cookbooks call for dredging the meat in flour before frying, as the Veal Marsala recipe in Julee Rosso & Sheila Lukins The New Basics Cookbook. Wondering if one method is preferable, I consulted Harold McGee's On Food and Cooking. He has excellent sections on Carmelization (simplest browning reaction is the carmelization of sugar which occurs at 330 degrees F and above) and The Maillard Reactions ("Even more fortunate and complex are the reactions responsible for the cooked color and flavor of bread crusts, chocolate, coffee beans, dark beers and roasted meats, all foods that are not primarily sugar."*** These reactions occur at 250 degrees F and above.  Given the high temperatures required for browning, McGee points out the browning must be done with dry cooking methods using oil rather than water which will never exceed 212 degrees F.  He concludes this section by stating:

"...one key to a rich-tasting stew is to brown the meat, vegetables and flour quite well by frying them before adding any liquid.  On the other hand, if you want to emphasize the intrinsic flavors of the foods, avoid high temperatures that create the intense but less individualized browning flavors."****

However, he offers no opinion of how to brown these ingredients.  This advice comes later in Keys to Good Cooking A Guide to Making the Best of Foods and Recipes where McGee writes, " Dry food surfaces, or coat in flour or breading to minimize spatter and sticking and speed browning.  Coatings prevent the food surface itself from browning, but add crunch and flavor."*****
As evidenced in the variation in of some of my favorite recipes, either browning well dried meat or flour coated meat works, producing subtle differences.  I have noticed that browned flour, which I use to make Enchilada Sauce has a much more interesting flavor than  plain white flour.  For recipes which call for browning meat, dried of excess surface moisture, first and then adding flour, I would consider either using Ms. Child's two step browning:  first meat, then flour with meat or where that is not feasible, browning the flour separately. I brown  flour by heating it in a dry pan over medium high heat, stirring constantly, until it begins to turn brown. Browned flour can be made in batches and stored for several months.

In his Section on Frying, Pan Roasting and Sauteing, McGee offers another piece of very useful advice: "Preheat the pan alone to 400 to 450 degrees F/200 to 230 degrees C, then add fat or oil.  Oil heated up along with the pan is more likely to get gummy and cause sticking."******  For this type of preheating it is best not to use a nonstick pan.  When following these instructions (photo at top) I do find there is much less sticking to the pan.

Posted by cookscache at 9:21 AM