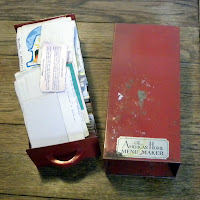 I started with the box itself. "The American Home Menu Maker", touted as "A Gift for Christmas She Will Like"  is advertised as "just the thing to give those friends who take pride in the efficiency and appearance of their kitchens. It is one of the most practical and simple methods ever devised for making instantly available all the delicious recipes your friends gather from current magazines, newspapers and the grocer."  Florence (1902 - 1996) was a writer; her early credits include a novel, As Strange a Maze, a story Heaven's Gate, the basis for the film  Our Little Girl, and many magazine articles. I was reminded of probably her most memorable article when her daughter forwarded a recent article from WellesleyWeston Online: "in her first job as a fledgling reporter, she interviewed Thomas Edison at the dawn of the television age. 'I asked him whether or not this new invention had any future,' she recalled. "He said he thought it did.'"* After Florence was widowed in the late 60's, she began to write about Revenue Cutters. I don't think she thought about taking pride in her kitchen or particularly enjoyed cooking. She would have delighted in ski, skating or sailing gear under the Christmas tree, not so much The American Home Menu Maker. 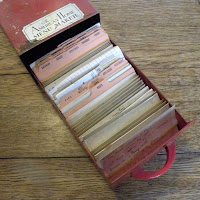 I opened it to find a stack of recipes on top of which was a cutout from a Styrofoam egg box with two methods for soft-cooked eggs.  The top pile also contained many post cards from me with recipes (mostly baked goods and desserts) that Florence had requested I send. Below the loose pile I found recipes from family, friends and publications randomly interspersed between the pale orange tabs meant to meticulously  organize recipes by category as well as intended day of use, and  transparent index card holders meant to keep recipes clean, a few even contained recipes Florence had typed. 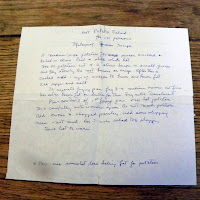 I found lots of recipes for cakes, cookies and other desserts and for shellfish and fish with cream sauces, several recipes for quiches, crepes, and cheese fondues, and recipes for "tea punch" some alcoholic, some not. Salad recipes, with the exception of a recipe for Caesar Salad, in my handwriting, and Hot Potato Salad, photo left, in Florence's handwriting, all contained some form of gelatin. The only vegetable recipes I found were for baked lima beans and her era's ubiquitous green bean casserole (frozen french cut green beans and cans of water chestnuts, French fried onion rings, and cream of celery soup). 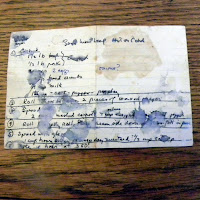 Makes sense that the most "used" looking recipe card, photo left, was the one with the recipe for Good Meat Loaf - Hot or Cold.  Along with Hot Potato Salad (holidays), deviled eggs, big steaks from the local market, Swordfish fresh from Vineyard waters, Beef Stroganoff, and green beans (over-cooked in the beginning)**, this is one of the things that Florence frequently served.  The meat loaf was one of her mainstays on Chappaquiddick and a meal that Alex and Chris especially liked. 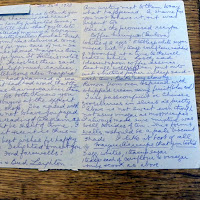 I also found a Christmas card with the handwritten recipe for Daniel Webster Fish Chowder which Florence later typed and sent to me and a Aerogram letter from one of Florence's Leighton relatives from New Zeland, photo left,  with a "promised" recipe for Coffee Meringue (Pavlova) which I may try at a future date. The one recipe I had really hoped to find but did not was Florence's recipe for Beef Stroganoff :-(

An interesting afternoon and reminiscent of my rambles through My Grandmother's Cookbook.

** From My Grandmother's Cookbook: "As I recently explored Ms. Farmer's cookbook for the first time, I decided this must have been my mother-in-law's source for cooking string beans. Directions read: "Beans, string 30 min - 1 hour" or until tender.  When Ed and I were first married, his mother Florence would start cooking the green beans  just before we sat down for a cocktail (so they cooked until they were grey-green and mushy). To her credit, she soon, following my  suggestion, cooked green beans for just a few minutes."

Posted by cookscache at 4:02 PM