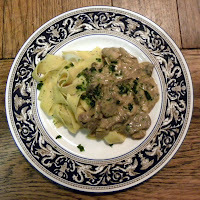 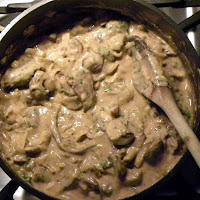 Seems like some weeks we just have "the old favorites" or the newest find (currently Mushroom Arugula Salad) over and over again.  I had broken the pattern by making New England Boiled Dinner when the markets were full of corned beef and cabbage for Saint Patrick's Day and had sour cream left from the sauce.  It occurred to me that I had not made Beef Stroganoff in a very long time.  I remember Ed's Mom (Florence Pfalzgraf, "Grandmother Up-Down" to Alex and Chris) making this from part of the huge steaks she got from William's Market.  I looked for her recipe, which I was unable to find (still looking), so I winged it (using less beef than FPK, I'm sure):

Thinly slice, trimming off any fat

1/3 pound sirloin steak and dredge* in

2 T flour, seasoned with salt and pepper to taste

In a medium size skillet heat:

and cook until onion is wilted. Then add beef and cook over medium heat until meat is browned on both sides.  Then add:

1/2 c baby bella/crimini or other mushrooms, stir gently for 2 -3 minutes, then add in this order:**

Stir well with a wooden spoon incorporating any loose flour (brown bits) from pan sides and bottom until sauce is smooth and mushrooms soft;  add additional stock if sauce is too thick.  Finally, add:

Mix just until smooth and warm but do not bring to boil.

* (June 2011) As I read more about "browning" I am inclined to omit the dredging next time.  Brown the raw, dried beef in the oil then blend butter with flour as in the recipe below or roll the browned beef in flour, then proceed as above.  January 2013: See Browning for discussion on whether to flour meat before browning, not at all, or as Julia Child does after initial browning.  This post also notes heating pan to 400 to 450 degrees before adding oil will minimize contents sticking to the pan.

** While I successfully combined all the ingredients in one pan all at the same time, the recipes I subsequently consulted in in The New York Times Cookbook (1961edition) and The New York Times International Cookbook (1971 edition) both by Craig Clairborne cook ingredients and sauce separately.  In the former the sauce (for 1 1/2 pounds of meat "about 6 servings": 1 1/2 T butter blended with 1 T flour to which 1 c boiling consomme is added all at once followed by 1 t prepared mustard) is prepared in a separate pan, the meat, not dredged, and onions are sauteed  in butter until browned on both sides in another pan.  The meat is then removed to a hot platter, sour cream is added to the sauce and then the sauce poured over the meat.  In the recipe in the The New York Times International Cookbook, the dredged meat (1 pound, "about 6 servings") is browned in butter, then the mushrooms, onion and garlic are added and cooked for about 4 minutes then removed from the skillet and kept warm.  The sauce (2 T butter to which when melted 3 T of flour are blended then 1 T tomato paste and 1 1/4 c beef stock added) is then made in the same skillet, adding sauce ingredients to "the pan drippings". The meat is then returned to the pan containing the sauce and  1 c sour cream and 2 T dry sherry are added and the mixture heated briefly.  This latter approach might be preferable if making more than 2-3 servings.

Email ThisBlogThis!Share to TwitterShare to FacebookShare to Pinterest
Labels: beef