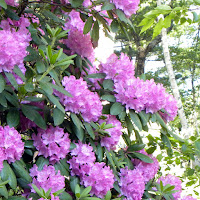 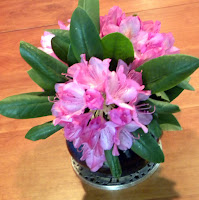 June came in with a fireworks finale as the Rhody bushes and then the Peony bushes exploded in color. For such a short time our yard and tables were vibrant with color, now at the end of the month the best we can do is pick a bit of green Andromedia for our the table while the more sedate day lilies and foxglove add some color to our woods. The spring show is over mid-June. 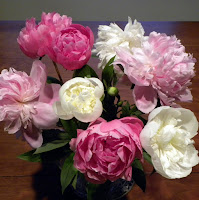 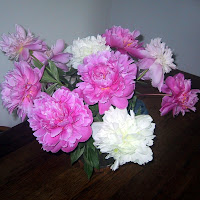 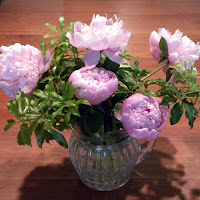 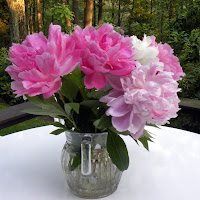 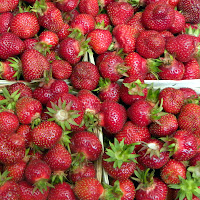 June flew by and the Asparagus was finished around the 20th leaving Ed (perhaps because he traveled during much of the season) and me still wanting more.  Strawberry picking beat the usual "Father's Day start" by several days and I still easily picked several quarts today. Haiku/hakueri turnips and radishes appeared early month and scallions, snap peas and shell peas appeared just after the asparagus disappeared. Zuchini and other summer squashes have just started. 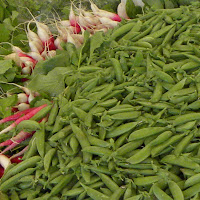 In addition to April and May offerings which continued into June, this month we have been especially enjoying:

Hummus with snap peas and radishes 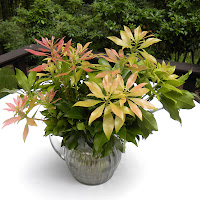 So far we have just grilled the zucchini and scallions but will no doubt have Fried Zucchini soon.

On a few of the hot nights we have had this month I have served cold chicken on bok choy and scallions with Spicy Szechwan Peanut Sauce.

As we end the month, a more subdued centerpiece - prunings from our Pieris Andromeda - graces our table.

After a day of picking strawberries in the hot sun, you may need to visit Make Strawberry Stains Vanish.

Posted by cookscache at 5:12 PM