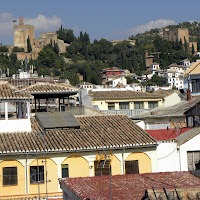 Still catching up on fall travel posts.  This time, Granada, where Ed and I spent several days in September.  Ed worked, I was the tourist. This was my third time to Granada. My first, in April 2002 with Alexandra was a 24 hour stop to see the Alhambra in cold pouring rain, far from ideal viewing conditions.  My second, with Ed last year, again a quick stop enroute from La Calahorra to Jaen, and an even quicker tour of the monument since our original tickets were voided by a general strike.  This was my first opportunity to really see the city and I did my homework accordingly.  We stayed at Room Mate Leo, a rather hip hotel I found in Small Inns of Spain. The room was small but well designed (ask for an upper floor) with access to a roof terrace with views of the city and Alhambra, photo at left (pricier rooms have their own view/balcony).  The staff was very helpful and recommended an excellent restaurant, Ruta del Azafran (azafran = saffron) for our first night. 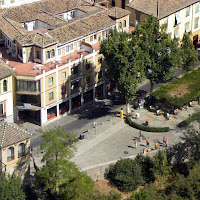 Ruta del Azafran is a contemporary, well designed restaurant in the Albayzin; both the outdoor terrace and the inside dining area have views of the Alhambra (photo at left is taken from the Alhambra). We shared a paella and a very nice wine, Blancas Nobles from Barranco Oscuro.  The paella, though more creamy (risotto-like) than most I have had was very good with a minimum of unshelled seafood and a lot of shelled clams and chunks of fish mixed in the rice.  We liked the restaurant well enough to go there again after our trip to the Alpujarras on our last night in Granada . That night Ed had a lamb cous cous and I had turban bass stuffed with zucchini and prawns with crispy wild rice and lemon foam, both very good.  Serving the stuffed fillet on edge and the fried wild rice was a take-away but I'm not yet into making foams. 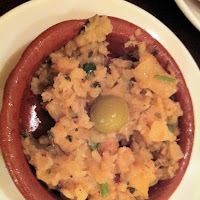 Our second night in Granada was consumed by Ed's conference and on our third night,  we tried  Bar Poe  which came highly recommended on a guide I had on my Kindle.  Neither Ed nor I are huge fans of tapas bars; smoke, noise and the typical lack of translated menus being the chief reasons.  As of January 1, 2011 smoking is not permitted in Spanish bars and restaurants :-) and I read that this bar is run by an English couple so we decided to give it a try.  We ended up sitting right at the bar and chatting with one of the owners Matthew Poe. 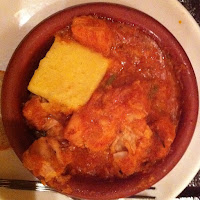 Unlike most tapas bars the selection of tapas is very limited and very eclectic rather than tipico/regional.  We especially enjoyed the Portuguese style salt cod (photo above left), the Chicken in coconut sauce with polenta (photo left), Brazilian blackbean and pork stew and Chicken in spicy Thai sauce.  Perhaps due to the early week-night hour (~9) the bar was full but not crowded or noisy and we enjoyed the food, wine and our conversation with Matt. A huge amount of tapas came with our reasonably priced bottle of wine so this was both a fun, delicious and economical evening. 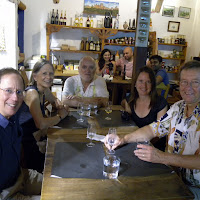 The culinary highlight our our stay in Granada was dinner at La Oliva. Since the excellent reviews in TripAdvisor advised making reservations, I called a few weeks ahead of time,  spoke with the owner Francisco Lillo, and reserved the only night available during our stay. La Oliva is not a restaurant per say but rather a very good gourmet store featuring olive oil,  wine and other local artisan food items.  Francisco, delights up to eight people for a tasting lunch or dinner several days a week, sharing not only Andalucian ingredients but the stories behind them.  The night we, along with a collegue and his daughter, arrived, there were already four people seated at the other table.  Francisco greeted me warmly with a big hug saying, "You must be Priscilla!" This was the beginning of an incredible evening. For the next three plus hours we felt like Francisco's invited guests as we took a culinary journey around Andalucia. 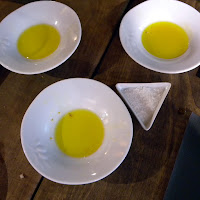 We started with three kinds of olive oil served with bread, salt and water; no wine yet as Fransisco wanted us to savor the different oils which he presented from different regions of Andulucia. Then came many small courses, representing the region and the season: olives, almonds, Iberian ham, canapes with toppings of green olives and eggplant, truffels and creamy cheese, and black olives and sundried tomatoes, cheeses, asparagus, tomatoes and basil and other seasonal vegetables, fish and pork dishes accompanied by special sauces, olive oil and olive oil mayonnaise. 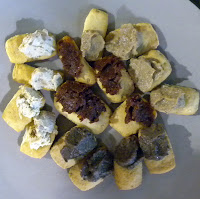 Many of these products are sold at La Oliva, and most of their producers are well known to Francisco, "I have sat at the farmer's kitchen table",  he would tell us beginning his description, the source and production, of the food on the plate he had just placed on our table. Following his story, the patient teacher answered our questions. 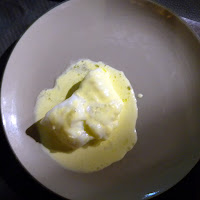 Most selections we shared off a common plate though some, like one of our favorites, hake in saffron sauce, photo left, were served individually. Francisco served over a dozen courses accompanied by a selection of regional wines. With the help of one assistant, he does all the preparation and serving himself, yet has ample time to discuss the farms and artisans producing the food he has prepared.  Amazingly,  Francisco has no real kitchen and cooked the hake and saffron sauce, the pork in garlic sauce, the asparagus... on a single  propane camp burner. 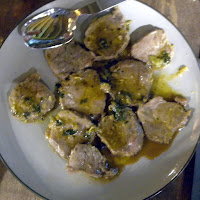 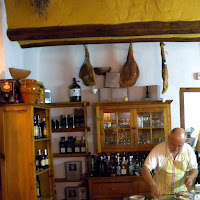 Finally, Francisco excused himself to "go across the street to get your dessert." He returned with chocolate gelato which he served with a drizzle of Basilippo Aromas Extra Virgin Olive Oil and Oranges from Seville.  Awesome. I purchased  two bottles and am enjoying the first over Stoneyfield Farm non-fat frozen chocolate yogurt and also on vanilla frozen yogurt served with Orange Olive Oil Poppy Seed Cake or Almond Olive Oil Cake.

Over three hours after our 7 pm arrival, we finished our conversation with Francisco, thanked him profusely and said our good-byes.  (We also paid him the flat all inclusive 30 euros per head and purchased some wine and olive oil). We left, in his own modest words, "the only a shopkeeper" pondering his success and wondering how to accommodate the cascading requests for reservations while still preserving the intimate experience for both himself and his guests. 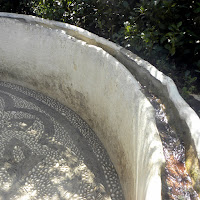 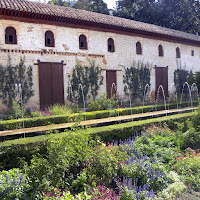 So what to do to work off all the calories while Ed attended the conference?  Lots of walking. I walked all around the Albayzin taking in the view of the Sierra Nevada and the Alhambra from Mirador San Nicholas and savoring Calle Caldereria Nueva, lined with North African shops and tea houses.  I had made reservations for two different days for the Alhambra, a quick tour with Ed and a rain-check, longer tour opportunity for me.  The unseasonably hot sunny weather (in the eighties) made the water features of the Alhambra particularly sensuous.

The Escalera del Agua, a staircase on the grounds of the Generalife with water flowing down the "rails" (photo of a landing, above left), the water channel along the access road to the Alhambra entry as well as the numerous fountains (Patio de la Acequia, at left) gave reason for a refreshing pause.  Having just finished Washington Irving's The Alhambra, I lingered at the Jardin de Lindaraja and the Torre de las Infantas. 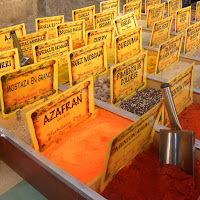 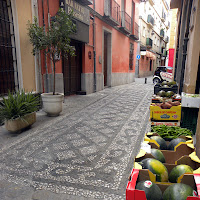 Serendipitously. I came across an exhibit,   M. C. Escher: Infinite Universes at The Palace of Charles V, located there in part because the geometry of the Alhambra mosaics and carvings had a great influence on Esher when he visited in 1922 and again in 1936. Love his statement "Mi ombra es un juego, pero un juega muy serio." The larger part of the exhibit was housed in the Parque de las Sciencias  and I enjoyed that exhibit as well as a quick run through parts of this large museum of science. I stopped to view a two case exhibit "In Memory Of..." containing old computer chips and hardware - most produced and discarded since Alex and Chris were born. The extensive grounds also have interesting displays including good wind and solar energy exhibits.

In the old city,  I toured the Cathedral and then the  Capilla Real, the mausoleum (yes, one can view the lead caskets) of the Catholic Monarchs, Isabel and Fernando. In the latter, I found the fusion of church and state, monarch and saint fascinating.   At the end of the day I just loved wandering through the streets, enjoying the spice stalls near the cathedral and looking at the smooth stone paving that is so typical in this part of Spain.