A Tale of Two Woks 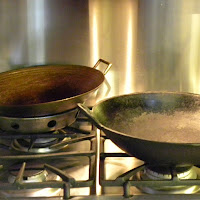 On a day off, years ago when I was in Indonesia for work, I was walking down a street in Denpasar with some colleagues. We passed a hardware store that had cast iron woks in the window.  It was quickly determined that if I did not already have a cast iron wok (I did not), I should take this opportunity and purchase one immediately. Next thing I knew I was half the world away from home, the proud owner of a 5 pound, 13 inch diameter cast iron wok. Despite early misgivings about this impulsive purchase, I did manage to get the wok back to Massachusetts, and it has been one of my kitchen favorites ever since.  When Christopher recently talked about getting a wok that did not have a teflon finish so that he did not have to worry about high temperatures, I set out to find him a wok similar to my own.  In my limited search to date, the best I could find was a cast iron wok from the Wok Shop in San Francisco.  I suspect there are equal or better sources in New York but have not had the opportunity to check them out. When Chris opened this Christmas package, I think he was totally underwhelmed; the wok was a dull military gray and very light weight (at ~2 1/2 pounds, about half the weight of mine). 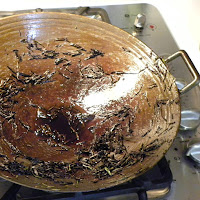 We followed the Wok Shop's instructions for seasoning:  first scrubbing the wok very well in hot soapy water to remove the protective oil, then drying it and lightly coating it, inside and out, with peanut oil and placing it in a hot (425 degrees F) oven for 20 minutes.  Despite the fan, the kitchen became quite smokey; we closed the interior kitchen doors and opened the exterior door for the duration. When we removed the wok from the oven it was beginning to look a bit more promising.  The next step suggested by the Wok Shop is to preheat the wok and 1 tsp cooking oil, then stir fry pungent veggies, e. g.  onions, ginger, green onions, garlic, or especially chives,  until the veggies are burned, and then toss them out.  This should remove any potentially metallic taste. We used peanut oil and a huge handful of  chopped chives and grated ginger.  My range's high power burner made the wok especially hot and we successfully charred all the chives and ginger. The wok was getting character, maybe even wok hay; Christopher seemed more enthusiastic.


Chris took his wok back to Brooklyn and the first night home cooked some steak and broccoli and reported: "I'm becoming a wok junkie with my 'gold standard wok' --- it came out very well --- it is nice being able to heat a wok really hot before putting meat in without worrying about teflon" The next night he tried tofu, broccoli, carrots and water chestnuts and again reported "it was really good"; he also noted "i measured the wok to be like 450F during the tofu cooking i don't know if you're allowed to go that hot with teflon".


Although I offered to get Chris a large wok for dinner parties, he correctly pointed out that two smaller (13-14 inch) woks would work much more efficiently on his stove than one large one.


While we were getting ready to season the wok, Christopher took Barbara Tropp's The Art of Chinese Cooking, a book he had given me many years ago, off my bookshelf and began reading about seasoning.  In the process he also discovered that the ideal position for a dual-diameter wok ring is wide side up. Makes perfect sense as it permits a greater spread of heat to the wok.  Often the burner configuration requires the ring be placed narrow side up, but it works perfectly fine on my range the preferred way, yet all these years.... Should have read the intro and not gone directly to the recipes.

A wok brush/cleaning whisk is a plus, I had one for many years and got a new one this year. I've also used a brass skimmer for many years.  I got these two accessories for Chris along with some black iron wok utensils. The latter were a huge mistake. Though cool, if primitive, looking, it's a case of metal on metal (what is flaking off?) and the metal on metal contact noise is terrible. Wood utensils and a silicon spatula are much preferable.

Photo at top left shows new wok, seasoned and on a wok ring in proper position, and, at right, my 30 plus year old Indonesian wok.