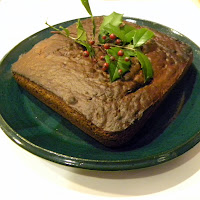 Recently when travelling in Colorado, Ed ordered Warm Apples and Gingerbread with Calvados Sabayon. Not a fan of gingerbread myself, I never realized Ed liked gingerbread. Later that week, as house guests in Boulder, we were served a gingerbread that even I liked.  I found the recipe in Molly Katzen's Enchanted Broccoli Forest and decided to makes this for the Christmas holiday instead of the Molasses Cookies/Gingersnaps, which have not been terribly popular in recent years.  I pretty much followed the recipe but used 6 T of olive oil in lieu of butter or canola oil. 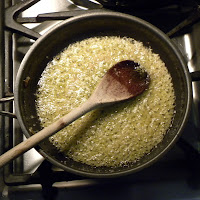 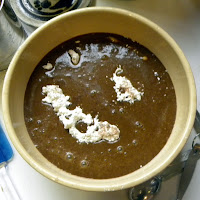 
In a small skillet melt:


Add and saute together over medium heat for about 3 minutes, or until fragrant:


Combine in  a small mixing bowl, and beat at high speed with an electric mixer for 2 to 3 minutes: 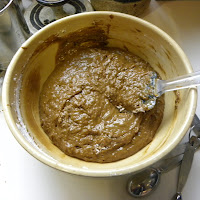 Add the ginger mixture and beat for one minute more.  Whisk in:


Beat at high speed for an additional minute then set aside.  Sift* into a large mixing bowl:


Make a well in the center and pour in the wet mixture.  Mix with a few decisive strokes until throughly combined.


Spread into the prepared pan. Bake 30-35 minutes, or until the top surface is springy to the touch [and a small skewer or broom straw inserted into the middle of the gingerbread comes out clean].  Cool at least 15 minutes before slicing.  Good with vanilla or ginger frozen yogurt or ice cream or whipped cream.


* This time around I put all this stuff through my sifter and then had to clean the sifter. Not easy. Decided the better option is to weigh the flour to get sifted flour equivalent, then just add the spices which aren't "lumpy" anyway.