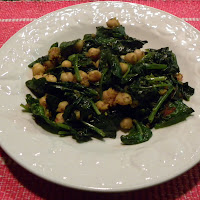 There are lots of recipes for chickpeas and spinach; I sometimes make Chana Masala (Spicy Chickpeas and Spinach), and as part of a collection of "Recipes for the Semi-Vegan" in the December 29 issue of The New York Times Magazine, Mark Bittman has yet another recipe for this combination, a recipe very similar but not quite as complex as the one, "Garbanzos con espinacas" that caught my eye in Moro:The Cookbook . Compared with Bittman's, the Moro recipe includes saffron and fresh oregano, uses red wine vinegar instead of sherry, and starts with bread cubes rather bread crumbs .  The Moro recipe is very good, my guess is that if the spinach is not overcooked, the Bittman one would be good too.

The Moro recipe calls for 500 g of spinach; first try I used 352 g which seemed like a lot of spinach before it cooked down. The chickpea spinach ratio was okay but would have been better with the requisite amount of spinach.  The saffron is a luxury, use it if you have it and want to, but the smoked Spanish paprika (pimenton), sweet (dulce) or hot (picante), is a must. Before being ground the peppers are dried over oak fires to impart a distinctive smoky quality. I use the Safinter brand which is available at Whole Foods.

I cooked a vegetarian dinner for guests last week using this as a main course preceded by Beet Soup with Cumin and followed by Almond Olive Oil Cake.  All totaled, about one quarter of a cup of olive oil per person but no animal fat/butter.  To reduce my company time in the kitchen, I made the bread paste early. Making the bread paste is by far the most time consuming part of this recipe; if I were halving this recipe to serve two, I would make a full recipe of the bread paste and reserve half for future (within a week) use. Alternatively, as Bittman does, use bread crumbs prepared in large batches.

I  now save a step and cook the chickpeas and paste first and then add the (uncooked) spinach and oil and cook until the spinach is wilted.  If using less oil or the spinach is quite dry and bread paste sticks to the pan, I add a little water to loosen the paste. 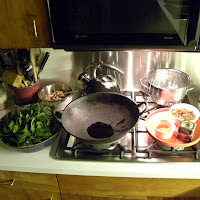 While I can understand the Moro recipe (cook spinach and set aside) I do not understand the Bittman recipe where the spinach is cooked to the wilting point then the chickpeas are added and cooked for five more minutes.

Soak overnight with a pinch of bicarbonate of soda

Drain the dried, soaked chickpeas  in a colander, rinse under cold water, then place in a large saucepan. Fill with 2 liters cold water and bring to a boil. Reduce the heat to a gentle simmer, skimming off any scum as it builds up and cook for 1-2 hours until the chickpeas are soft and tender. Remove from heat, pour off excess liquid until level with chickpeas, and season with salt and pepper and set aside. OR USE [as I did] two 14 oz cans of chickpeas, drained and rinsed with cold water. 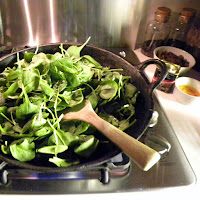 [I skip this pre-cook and add raw apinach to warm chickpea mix.] Place a large saucepan [I used a wok] over medium heat and add 3 T olive oil, when oil is hot add

Remove when leaves are just tender, drain in a colander and set aside. 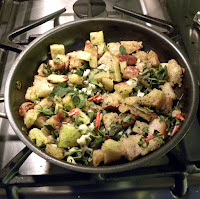 Bread Paste
In a frying pan [to save pans, use larger wok for this and subsequent steps] heat:

Fry the bread for about 5 minutes until bread is golden brown all over, then add: 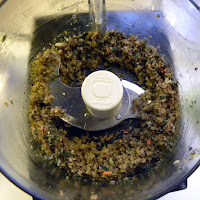 Cook for 1 more minute until the garlic is nutty brown. Transfer to a mortar and pestle* or food processor along with 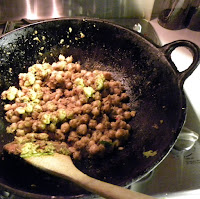 Mash to a paste.

Stir until the chickpeas have absorbed the flavors and are hot, then season with salt and pepper.  If the consistency is a little thick then add some water.  Add the spinach and cook until it too is again hot [or if spinach is added raw, until it is wilted] and served sprinkled with [I mixed in 1/2 t then just put a tiny additional dusting on top] 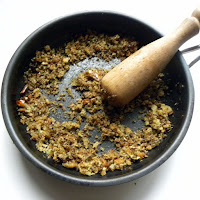 *  April 2012: I made a half recipe of this last week and instead of using a food processor to make the paste, I let the bread cool and dry until it was "crunchy", then used a wooden pestle to make the paste.  A tiny bit more time to crush, but a much quicker clean-up.

Posted by cookscache at 7:55 AM