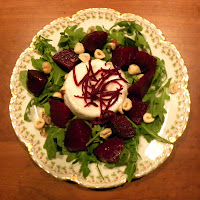 Two years ago I wrote about the awesome beet, hazelnut, and arugula salad with horseradish panna cotta that Ed and I had for an appetizer at the Center Cafe in Moab. Shortly after, I tried to reverse engineer the recipe and the results were a runny disaster. Ed suggested my failure* was a result of trying to make the panna cotta "too healthy".  Panna Cotta, an Italian desert, literally means "cooked cream" and I had substituted non-fat yogurt. When I asked about the panna cotta at the restaurant the waiter suggested it was maybe made with some yogurt (in retrospect not necessarily non-fat and not necessarily without cream).  Two years later I decided to stick to my non-fat goals and try again, this time with considerably more success.


Serves 6 (While this recipe serves 6, the prepared ingredients can be kept for 3-4 days with a smaller number of servings assembled at a given time.) 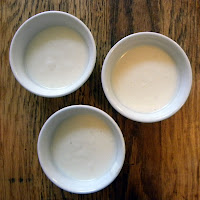 
Combine in a small microwave-safe bowl:


In another bowl whisk together:


When the gelatin mixture has cooled, add to the yogurt mixture and divide this "panna cotta" among 6 (1/2-cup) ramekins. Cover and chill for at least 24 hours. 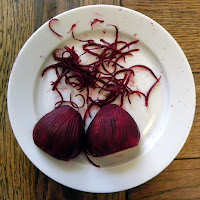 
Wash and peel (gloves recommended unless you like the red hand look):

Using a zester cut ~2 T of thin strips off the beets and reserve. If medium beets are used, cut beets in half; if small beets are used, leave them whole.  Place in a oven-safe baking dish.

In a small dish combine:

Pour over the beets. Cover (I forgot once and all the liquid boiled away) the dish with a cover or aluminum foil and bake for 50 or 60 minutes until the beets are tender. Remove the beets from the pan, reserving the liquid in a small dish, and cool until the beets can be easily handled to cut, then cut into small wedges.

To  the dish containing the reserved beet liquid add:

2 T vinegar (I use my homemade tarragon, wine or raspberry would work too)
½ t pepper


Pour the vinaigrette over the beets and refrigerate at least until the beets are cold. 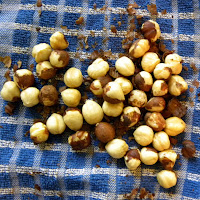 Place on a jelly-roll sheet or other shallow pan with sides:

3/4 c hazel nuts (or since oven is on anyway, roast more and save for other uses - awesome on hazelnut gelato!)

Place in preheated oven and roast for 5 to 10 minutes, or until the skins are blistered. Remove the pan from the oven, place a spoonful of nuts at a time in a dish towel and rub the nuts with the towel to remove loose skins (don't worry about skins that don't come off) and cool completely. Slice the nuts in half (optional). 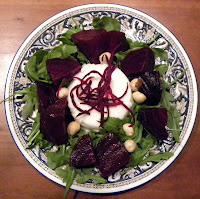