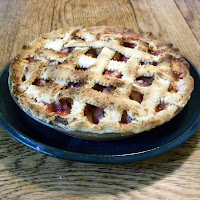 Inspired by the delicious vegan deserts (Strawberry cheesecake, almond crust, white chocolate, balsamic reduction; Passion fruit tart, shortbread crust, cascabel coconut caramel; ‘Death-by-chocolate’ cake, whipped coconut cream, crunchy shattered caramel) we had last month at True Bistro, I decided to try a vegan (crust) Strawberry Rhubarb Pie for Ed's Birthday Dinner.  My goal was not to make this a totally vegan dinner, in fact we had a custard like king salmon filet for the entree, but to end with a special dessert that was not butter laden.  Having had some success with some of Isa Moskowitz and Terry Romero's recipes, I went to their Vegan Pie in the Sky where I found a "Pie Crust" section containing 11 recipes. "Olive Oil Double Crust" sounded the most interesting to me, and I was convinced when I read their introduction to this recipe, "THIS HAS BECOME OUR GO TO CRUST.... The secret is to place the olive oil in the freezer beforehand, so that it becomes partially solid. This helps the fat blend into the dough in little pockets, creating the flakiness you crave."*

(Note about photo: At the last minute, for some reason I cannot explain (bad idea not to follow recipe!), I decided to sprinkle a bit of sugar on the crust, then decided it was a bad idea and tried to brush most of it off.  Residual sugar accounts for dark spots.) 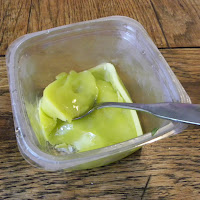 I know the bit about fat blending into the dough in little pockets to be true with a butter crust, if warm butter is used, the crust is not as flaky as a crust made (in all other ways) with cold butter. I followed the recipe's instructions and put 2/3 cup olive oil into the freezer about an hour before I intended to begin the recipe.  Even though I had put the olive oil in the recommended-type container, "a thin light [plastic] container like the kind used for takeout food"*, I found getting the olive oil to the right consistency took closer to an hour and a half.


When olive oil is the right consistency, congealed and almost as hard as cold butter, begin to make the crust.  In a large mixing bowl combine:

tablespoon by tablespoon, cutting the olive oil into the flour with a pastry cutter or your fingers until the flour appears pebbly.

In a cup mix together:

Drizzle 2 T of this liquid over the dough and mix with a wooden spoon or spatula. Add more water a tablespoon at a time, until the dough holds together to form a soft ball. Take care not to over knead the dough.  Although the Moskowitz/Romero recipe calls for 4-8 T water, I used only 4 T.  While I could form a ball, the dough was still a bit on the dry side and very difficult to work with (hence no work-in-progress photos).  On the up-side, the crust was very flaky.

For my Strawberry Rhubarb Pie I divided the dough, but not quite equally. I was a bit more generous with the bottom crust as I planned on making a lattice top.  Since the dough was a bit on the dry, crumbly side the edges of the crust were not as pretty as they might have been if just a bit more water had been added.

Verdict. Chris, my most reliable critic, said he likes butter crusts better but this was good.  I'm inclined to agree, but if for some reason you want a butter alternative, this is an excellent option.

Posted by cookscache at 2:54 PM