This is a real “comfort food” recipe from Moogie. I haven’t made this in many years, probably due to a combination of the amount work involved and the egg yolk content. As I type this recipe, however, I am hungry for this childhood favorite and will no doubt make it again soon. 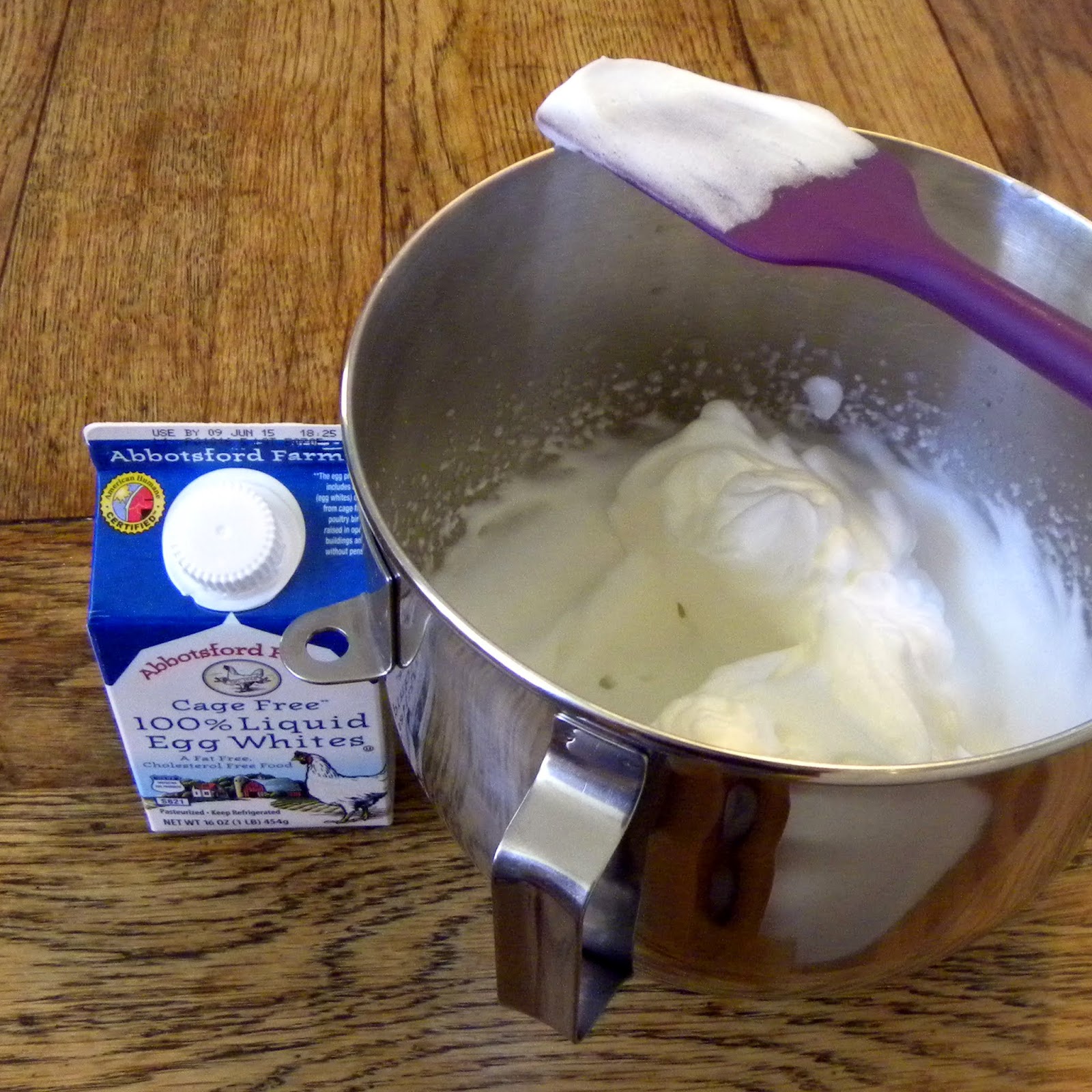 April 2015:  I finally made this again! It took discovering pastuerized egg whites then two tries to finally get the snow right. In the process I discovered the recipe as originally posted was probably a hybrid of two family recipes**.  I have correspondingly adjusted this recipe and added some technique notes. Following the new notes, it's really not that hard to make.  As with most recipes of this era I reduced the sugar quantity. Photos have also been added. 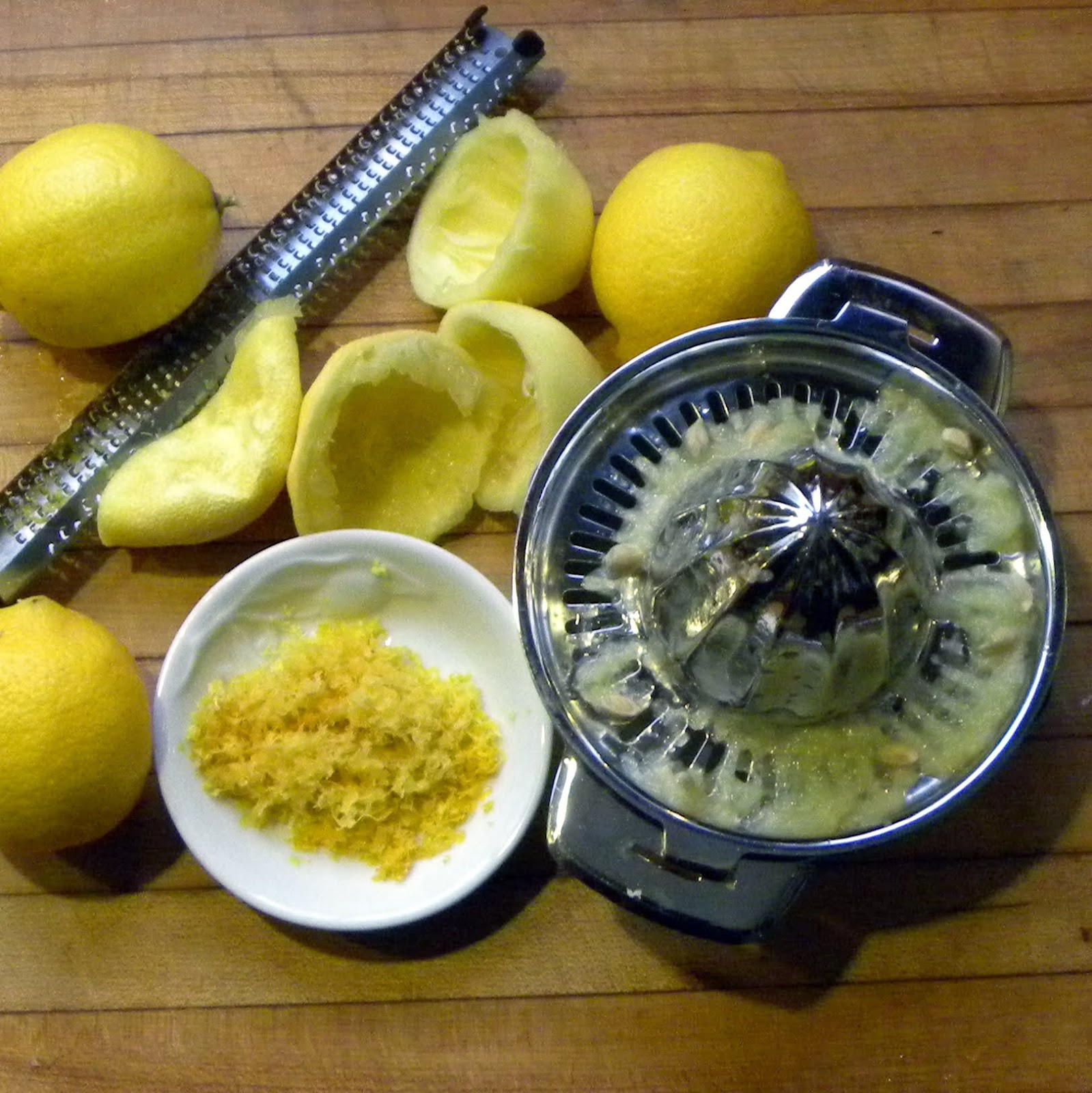 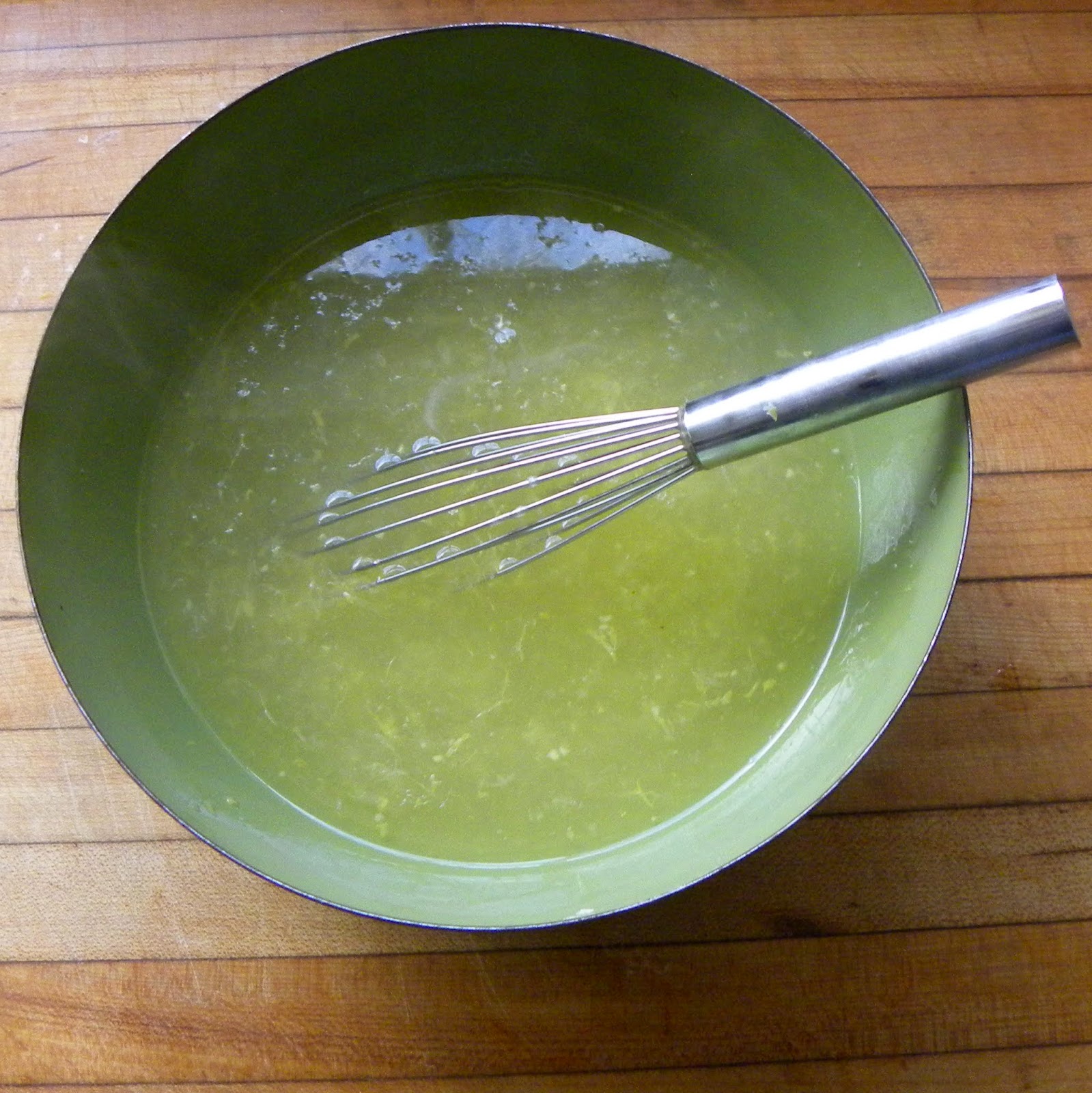 Add and stir until dissolved: 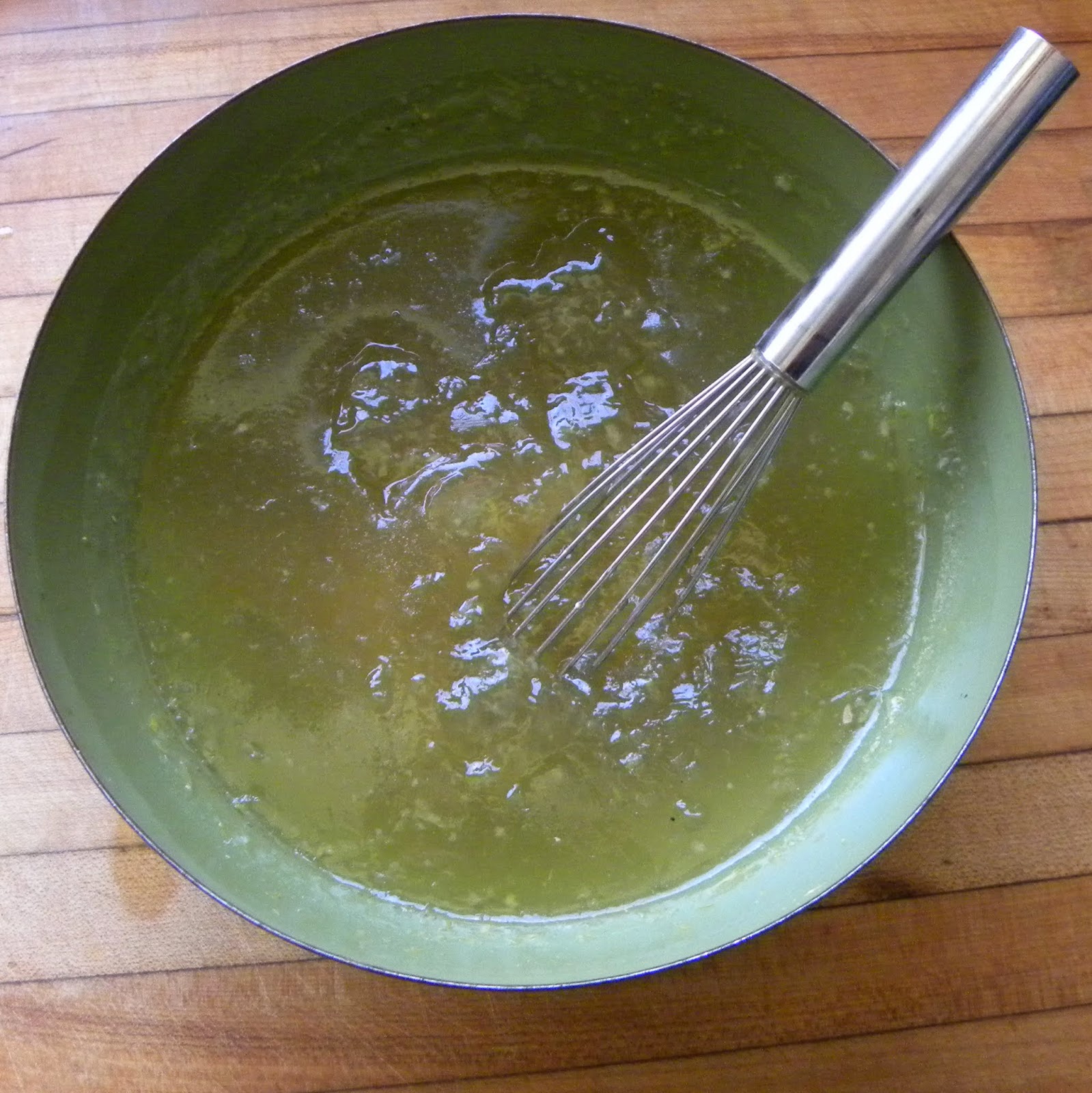 Chill until partly jellied [about 1 1/2 hour. This is important!  If mixture is not sufficiently jelled, the gelatin mixture and "snow" will separate, the liquid sinking to the bottom of the pan and the egg whites floating on top]. 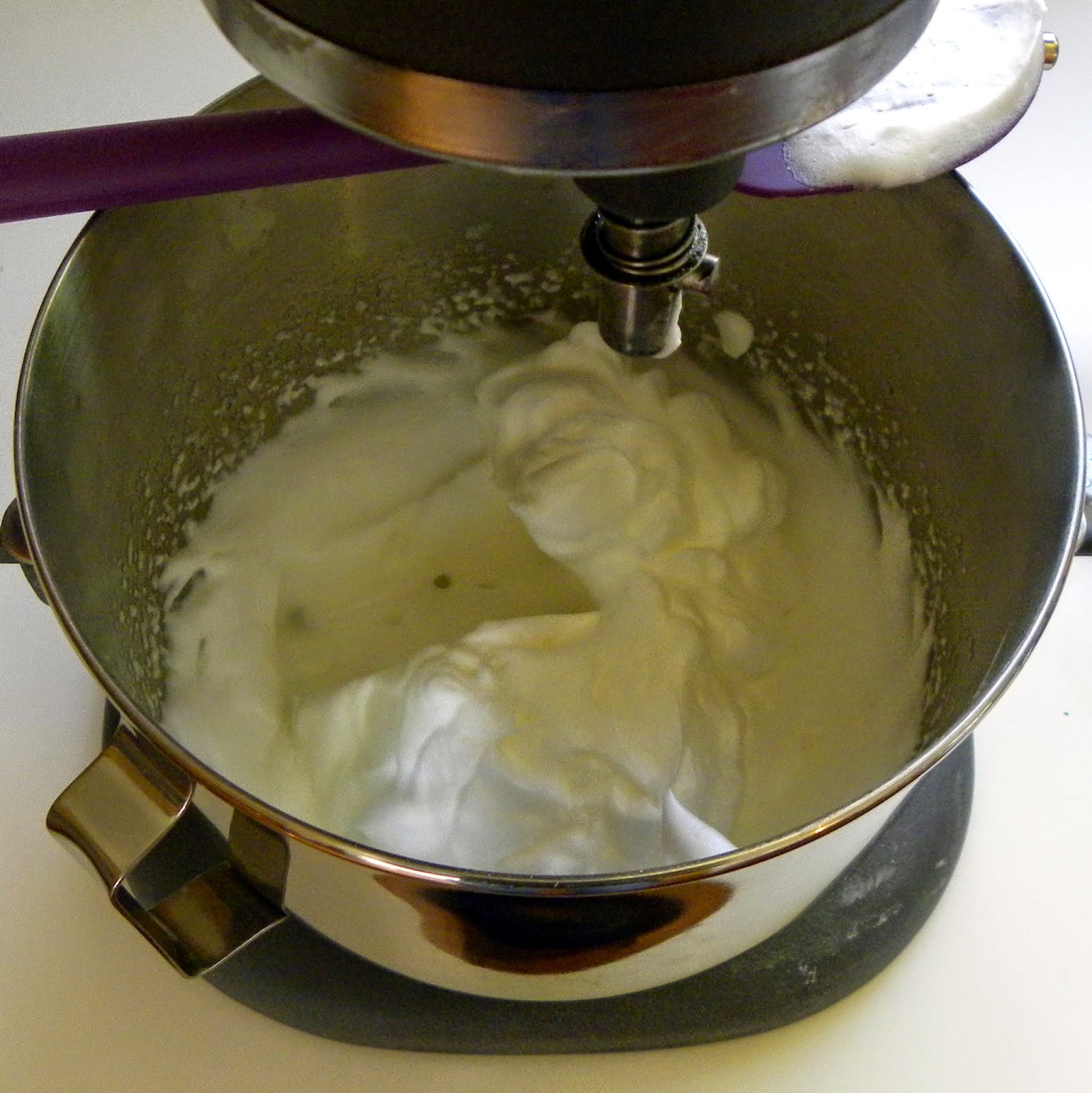 When gelatin mixture is almost thickened,  beat until stiff 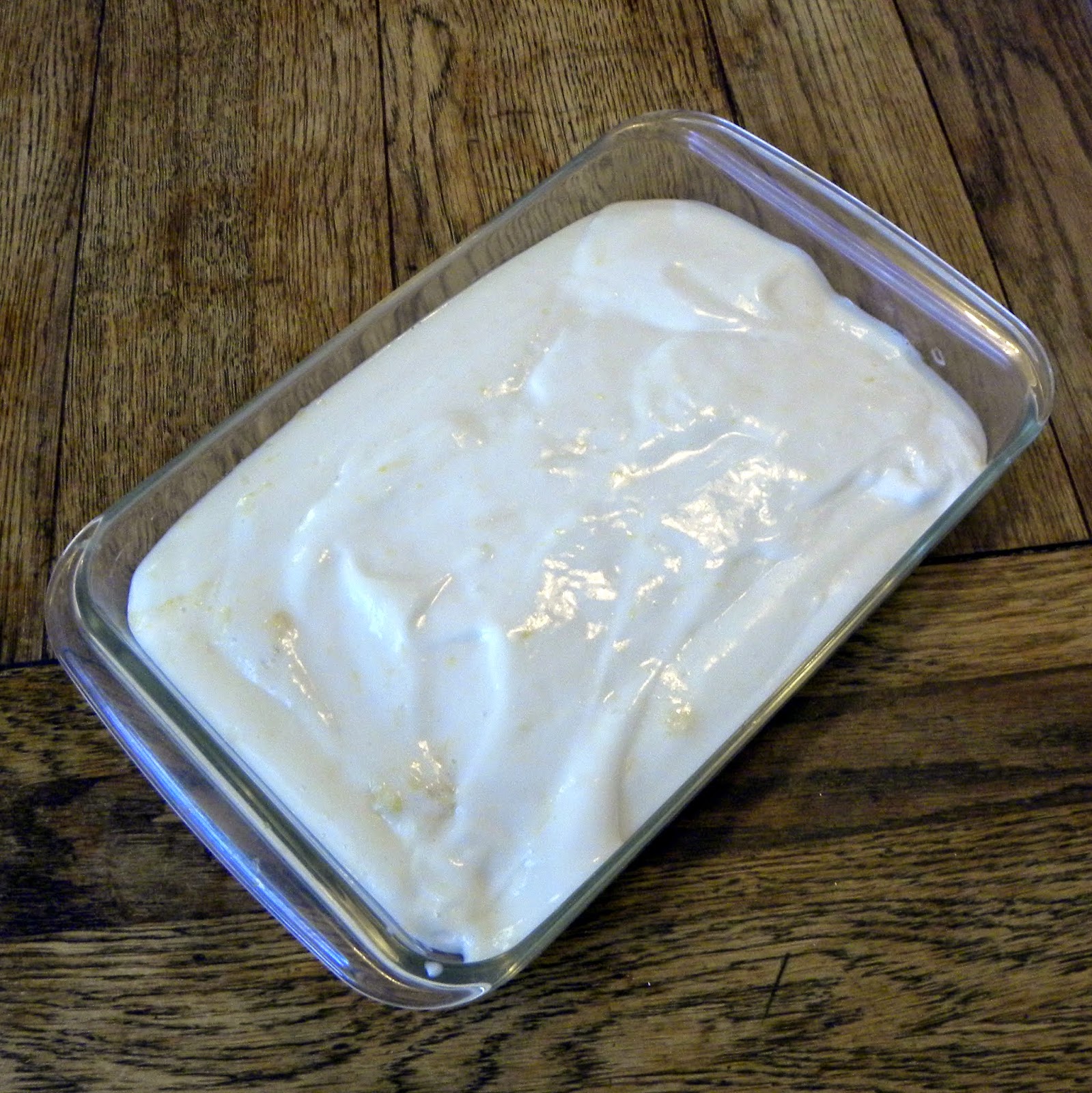 Gramma Grace/Moogie's recipe makes the same quantity of custard sauce but half the amout of snow as Hope's recipe.  Also the custard is made with 2 whole eggs:2 c milk vs 3 egg yolks:2 cups of milk resulting in a slightly thinner custard.   Having made both versions, I would opt for the recipe given above (Moogie's) which serves 4-6. 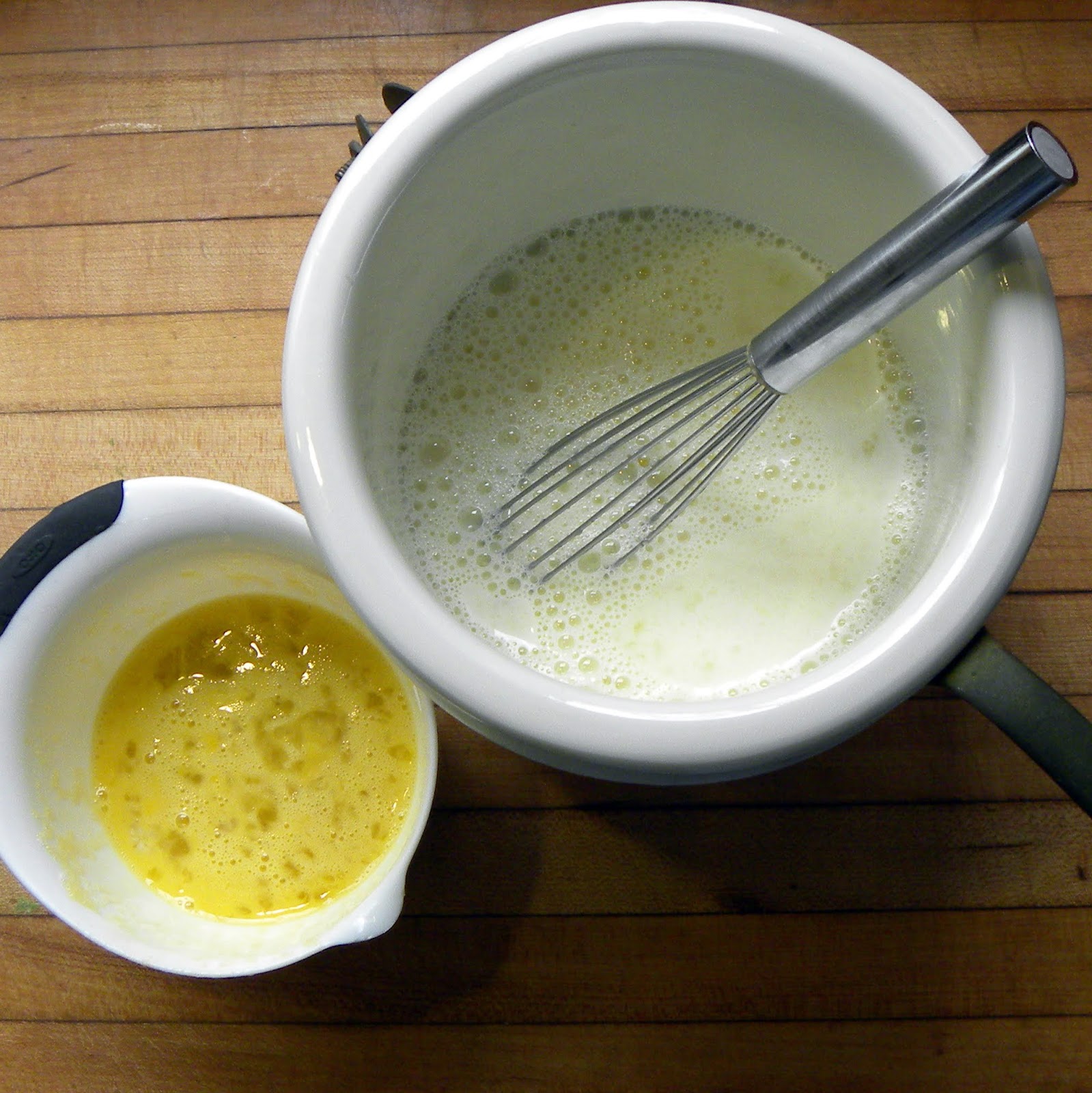 In the top a double boiler [i.e.  pan over hot water] scald 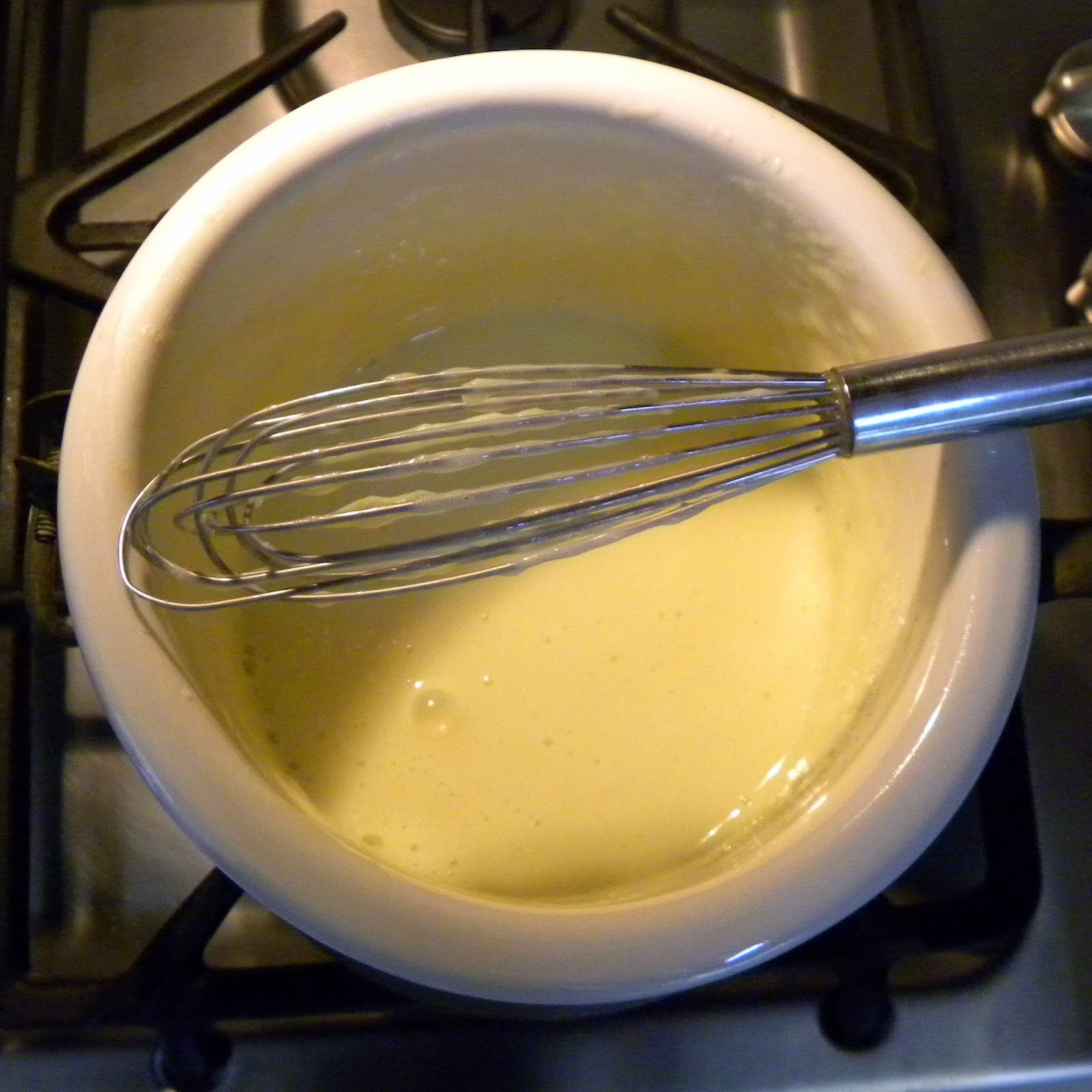 Stir scaled milk gradually into eggs and return to double boiler. Keep water in lower pan below boiling.  Cook custard stirring constantly until [it is] thickened and will form coating on metal spoon. (15 min) Remove from heat. Pour into jar to cool. Cover to prevent scum on surface.  When cool add 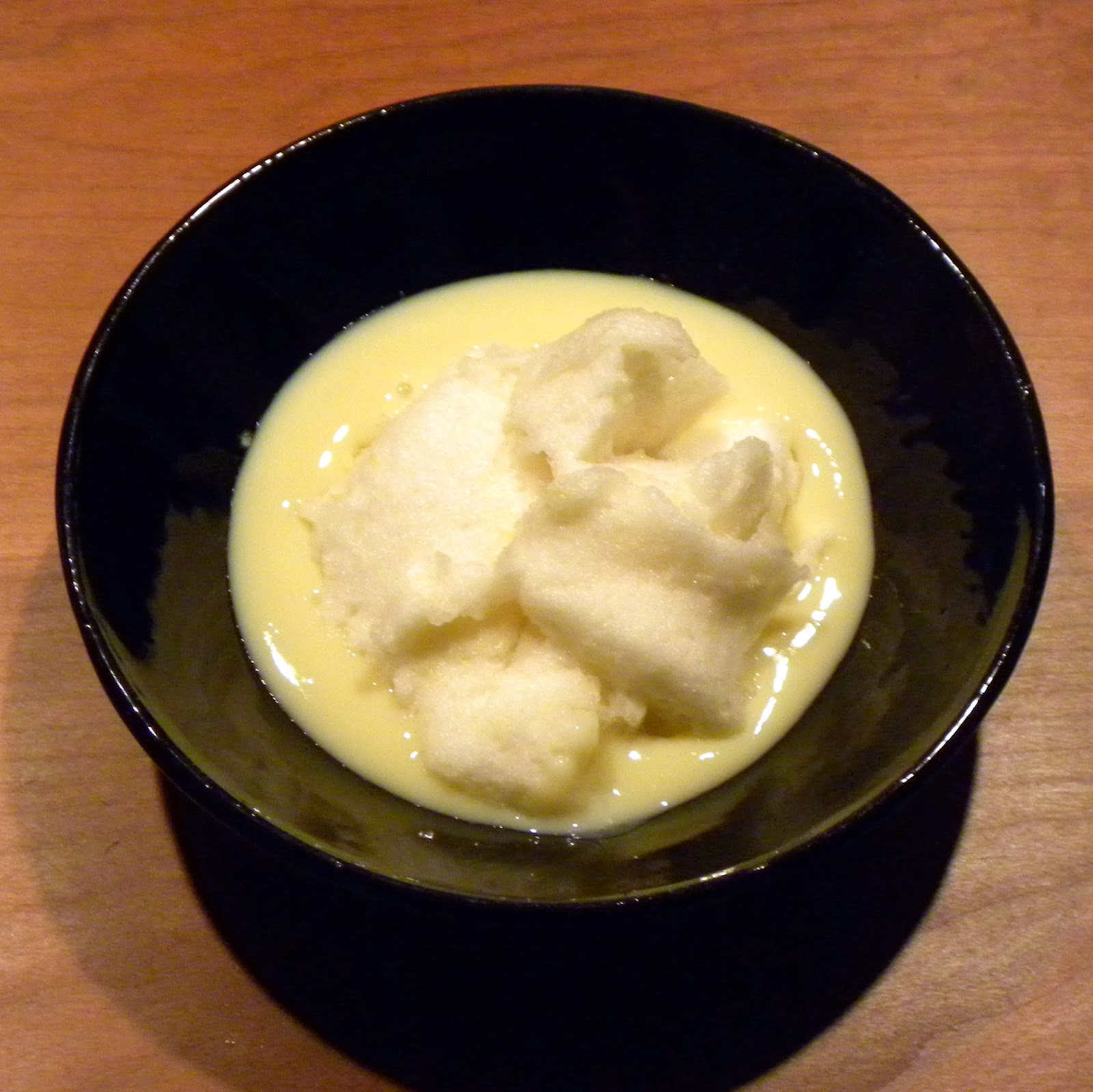 Spoon gelatin mixture into small individual bowls, pour Custard Sauce around the edge so the “Snow Pudding” sits like an island in the Custard Sauce.

As I typed this island reference I thought of a Floating Island dessert which I have heard of but never had. A Google search found this on Wikipedia:

"Floating island is made of egg white dumplings served floating on a milky custard sauce. Some variations uses a thicker sauce, served on top of the dumplings, but usually the milk mix is thin, almost liquid, and the dumplings "float" on top.

The egg whites are beaten with sugar and poured into a mould lined with a thin layer of caramel. Alternately, the whites can be shaped with spoons and allowed to cook gently in sweetened milk with vanilla flavoring. A custard is made using milk, sugar, vanilla, and egg yolks; the mix is cooked in a bain-marie [double boiler] for a few minutes, but must remain thin enough to pour. The custard is topped with the egg whites dumplings. The dish is served at room temperature or cold."

Snow Pudding is similar but by virtue of having gelatin as an ingredient in the "snow"/meringue, which as I remember does not float on the sauce, is probably not a real variation of "Floating Island". 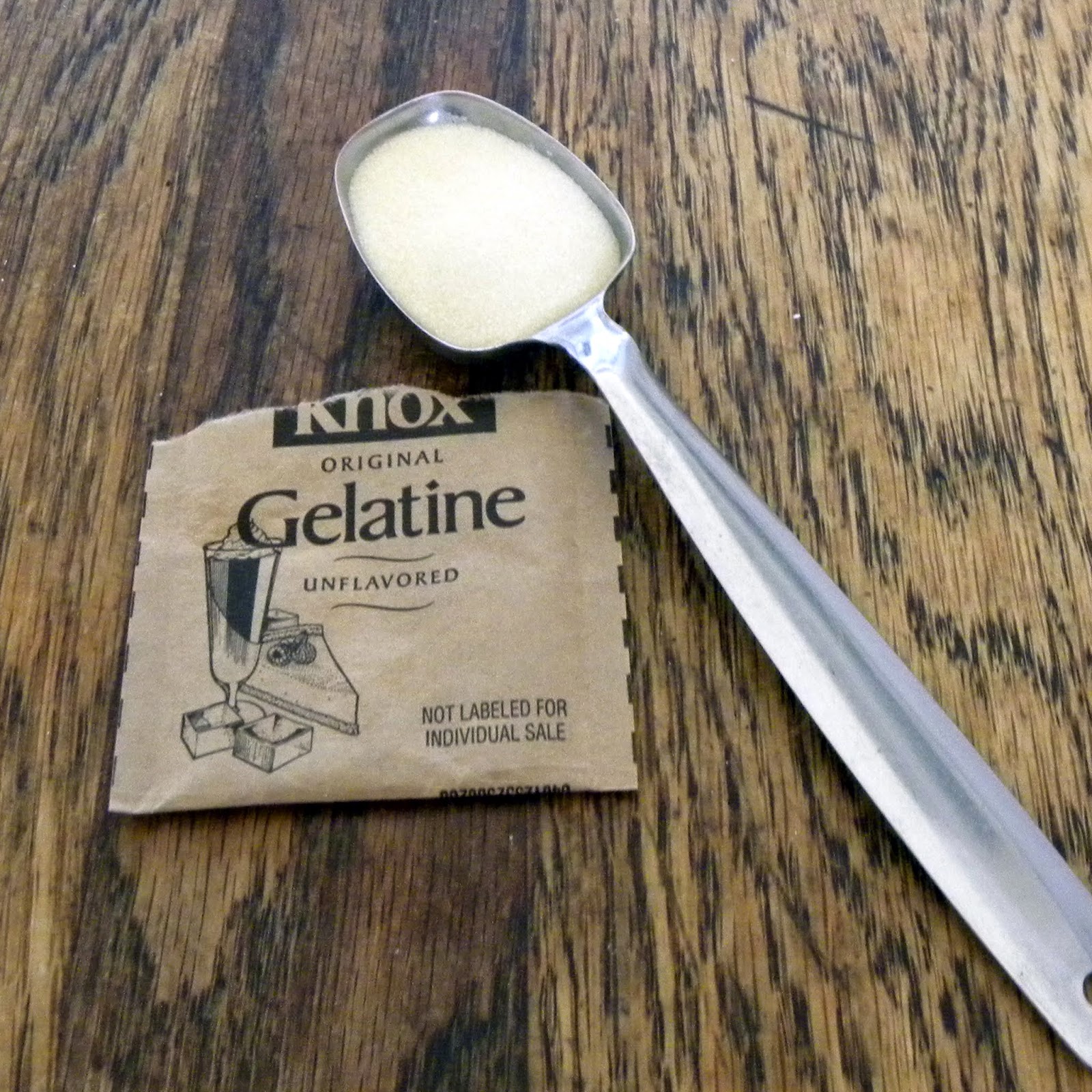 * April 2015;  It turns out 1 envelope of gelatin contains less than 1 T (see photo at left). Although several similar recipes I reviewed, including my Grandmother Hope's, call for "2 T (2 envelopes) gelatin", I used the full 2 T (2 + envelopes) first try.  The resultant snow was very gelatinous. Subsequently I used just 2 envelopes with excellent results. Perhaps the confusion is with a measuring tablespoon and a place setting tablespoon. 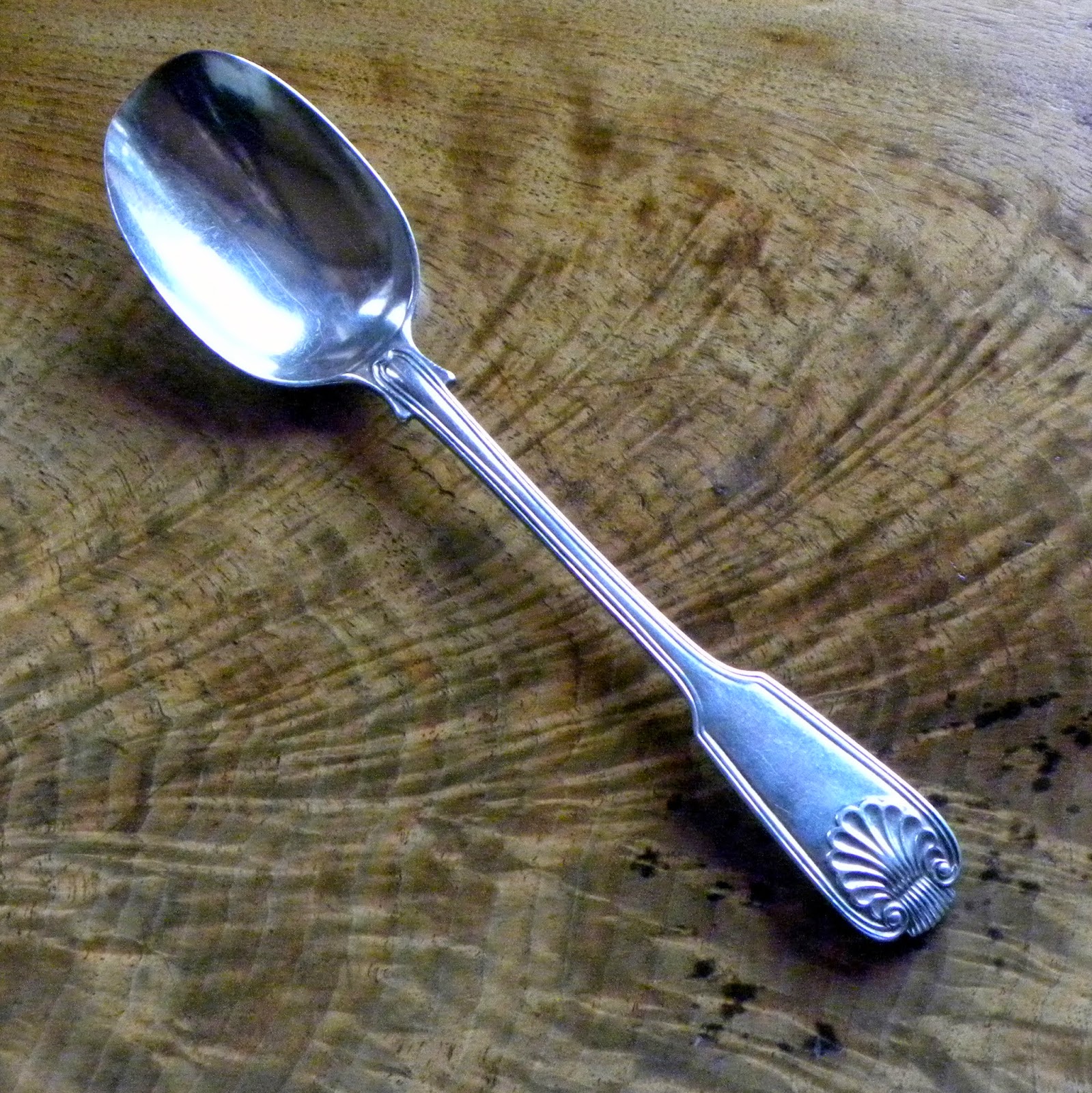 ** March 2015: My Mom has a couple of sliver spoons that are quite flat along the bottom edge of the bowl (photo left).  When I asked Mom why, she replied her grandmother, Gramma Grace, used them for cooking and had worn the bowl  from stirring. I recently asked Mom what recipes she thought had worn these spoons and she told me the only one that now comes to mind is Snow Pudding. I always thught this recipe came originally from my Grandmother Hope's Cookbook. However when I seached for this recipe (which I had taken from my Moms' cookbook) in Hope's cookbook, I found a recipe more similar to the floating island one above.  Unlike many of Grandmother Hope's recipes, this recipe gives some instructions as well as ingredients: 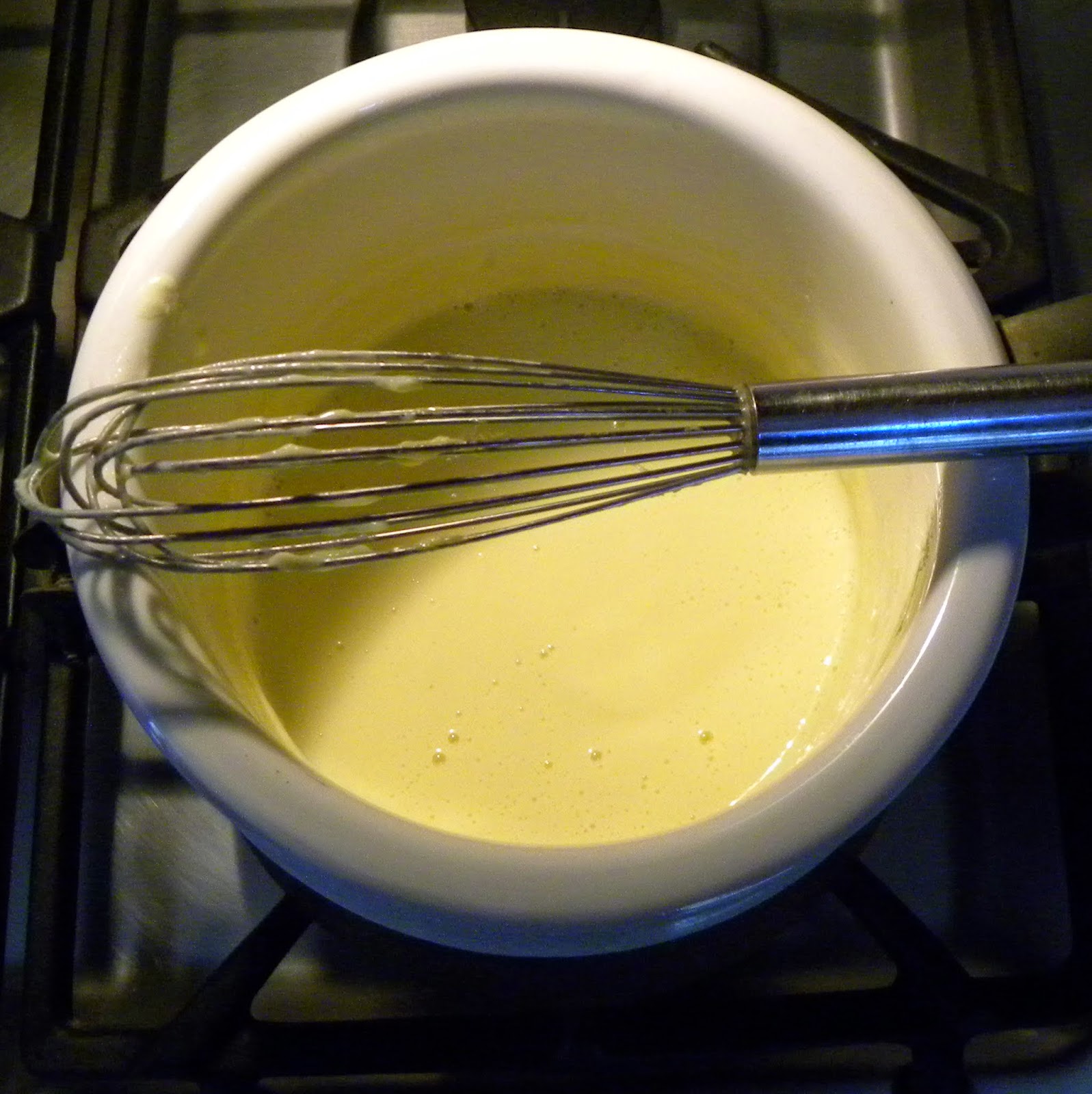 Posted by cookscache at 3:23 AM