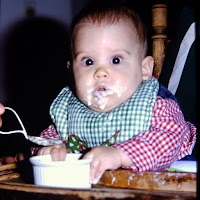 I started this post over a year ago prompted by 2 articles in the October 8 New York Times Magazine (Food Issue), a visit to Portland where our grandson Henry was just beginning to eat solid food, and a vist to the Portland Farmer's Market.

With babies and then children it is all about good choices when it comes to food. Since this had been on my mind again, I found these two articles particularly relevant. 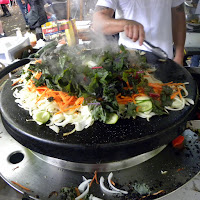 When we were in Portland last week we were waiting for coffee at a small shop enroute to the Farmer's Market, a favorite destination whenever I am in Portland.  A man and two small boys were at a table near us..The man had a moderately healthy looking breakfast sandwich and coffee. The boys each had a very sugary looking pastry and pink sugary drinks. After indulging in more than one almond croissant at Ken's during the past week I was in no position to be critical. However, when I was enjoying a delicious local veggies brunch at the Farmers Market (photo left) an hour later I could not help thinking about the scene at the coffee shop and all the healthy alternatives that for the same price or less now surrounded me. 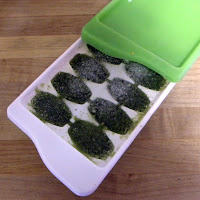 Our grandson, Henry, is beginning to eat solid food and I am delighted (but not surprised) to see the wonderful meals his mom, Alexandra (1980 photo top left), is preparing for him.  I remember making pureed chicken (put chicken and a bit of broth in a food processor and process until smooth), pureed carrots (likewise carrots and water) and a few other pedestrian offerings for Alexandra and later Christopher. To store, I would fill an ice cube tray and freeze.  Alex does the same but with many more foods including Oregon plums, apples, peaches, as well as spinach and peas (not Henry's favorite) and freezes the pureed food in ice cube trays that come with their own top.  Feeding Alex in a pre-microwave era I heated the food in an egg coddler. 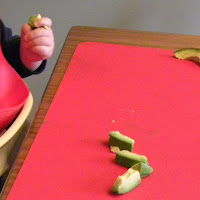 Henry is feeding himself at an early age.  This is the tend, Alex tells me. In fact some of Henry's friends have gone straight from nursng to "finger foods".  At the time of my visit to Portland avocadoes were a real favorite. 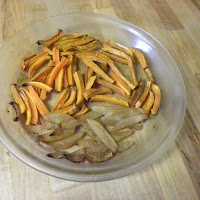 Alex also cooks pieces of carrotts and pears until they are tender and then gives Henry the pieces to eat. 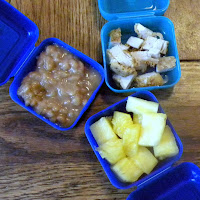 Flash forward a year later, Henry has left his Portland daycare and, with his parents, is living with us until they find a house in the Boston area. I am making his lunches before he heads off to nursery school/daycare. Mindful that his old daycare provided healthy meals and tried to introduce many new foods I try (sort of) to maintain that goal. 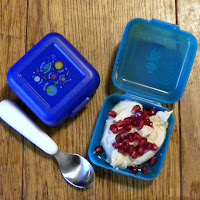 Hummus is a hit. But while his mom and uncle dipped celery and carrotts in the hummus, Henry likes to eat it with a spoon. The token carrot or celery stick I packed with the hummus came home untouched.  Since food is about color and how it is presented, it was hard for me to pack just a blob of hummus.  I had some fresh pomegranate seeds in the fridge and put some on top.  The snack box came home empty and since then Henry has enjoyed many more hummus-pomegranate lunches. 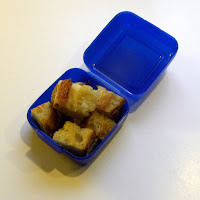 Toddlers will have a favorite food and then (temporairly) refuse to eat it, most often right after a large supply of the "favorite food" has been purchased. Happend with avocadoes, happened with grilled cheese sandwiches and cheese-spinach omlettes. Henry is now eating avocadoes again, though her prefers them in Guacamole, 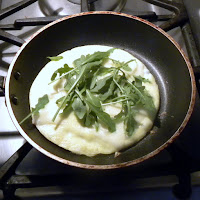 Listen to your toddler. After Henry started eating cheese omlettes again, Alex offered him a cheese-spinach omlette. Not such a hit. A few weeks later Henry and I had grilled cheese sandwiches for lunch, or actually I had a grilled cheese and arugula sandwich. Henry looked at my sandwich and immediately asked for green in his as he has since.  This morning I was going to make him a cheese omlette. As I was getting eggs out of the refrigerator, Henry spotted a box of arugula. "In omlet", he said as he handed me the box.  We are working back to the cheese-spinach omlette. 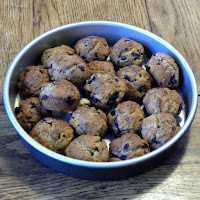 Henry's former school provided fruit popsicles on each child's birthday. Henry's current school leaves the treat up to parents.  Since the celebration is mid-morning rather than after lunch, Alex did not think popsicles were the best option and instead sent mini Blueberry Muffins which were a hit with all.  Okay, they contain sugar but so does birthday cake and the cookies I sent to school for Chris and Alex's birthdays.

Posted by cookscache at 3:26 PM