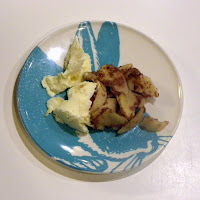 This recipe is for Henry. Apple Pie/Apples and Ice Cream  = (Apple Keam)

Henry's favorite dessert is Apple Pie, which Chris brings for holidays and occasionally just for dinner. I've begged Chris for the recipe, not that I'll ever be ambitious enough to make it, mostly because I could never successfully match Chris's pie, but just because it is so good. 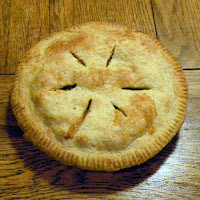 Most of the time Henry has to settle for my simpler Apple Crisp and Apple Cranberry Crisp or when I'm in a hurry this easy version of "Apple Keam" (rhymes with "team").

It's not just that this is easy to make, it is also pretty healthy. Compared to the alternatives, the sugar is minimal. The sugar is mixed with cinnamon (a lot in this recipe because Henry loves cinnamon - adjust accordingly) and flour to give the apples a "pie filling taste" and to help evenly distribute the small amount of sugar. 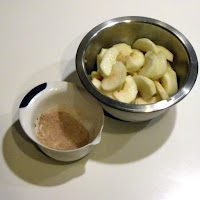 4 small apples or fewer larger ones (about 1 1/4 pounds total)
If using larger apples, cut slices in half to make them "bite-sized".

In a small bowl combine: 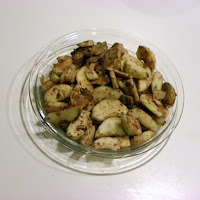 Mix and add to the apple - lemon juice mixture and toss until well mixed.

Put mixture into a pie plate. 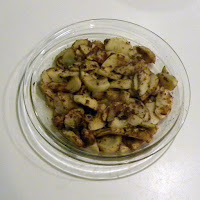 Microwave on high for approximately 4 minutes, stirring every minute, until the apples are soft but not mushy.  Cool and serve plain or with with vanilla/ginger ice cream, or yogurt (apples and cream)! 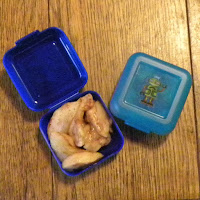 These are also one of Henry's favorite lunch treats. 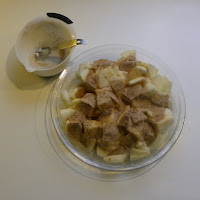 * Or to save dishes, mix the apples and lemon juice in the pie plate in which they will be cooked. 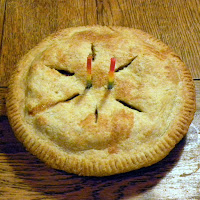 28 January 2016: Apple Pie is now a family "Birthday Cake".  This was Henry's "cake" of choice for his second birthday  He joins my brother, who instead of cake, chooses to celebrate his birthday with a Strawberry Rhubarb Pie.