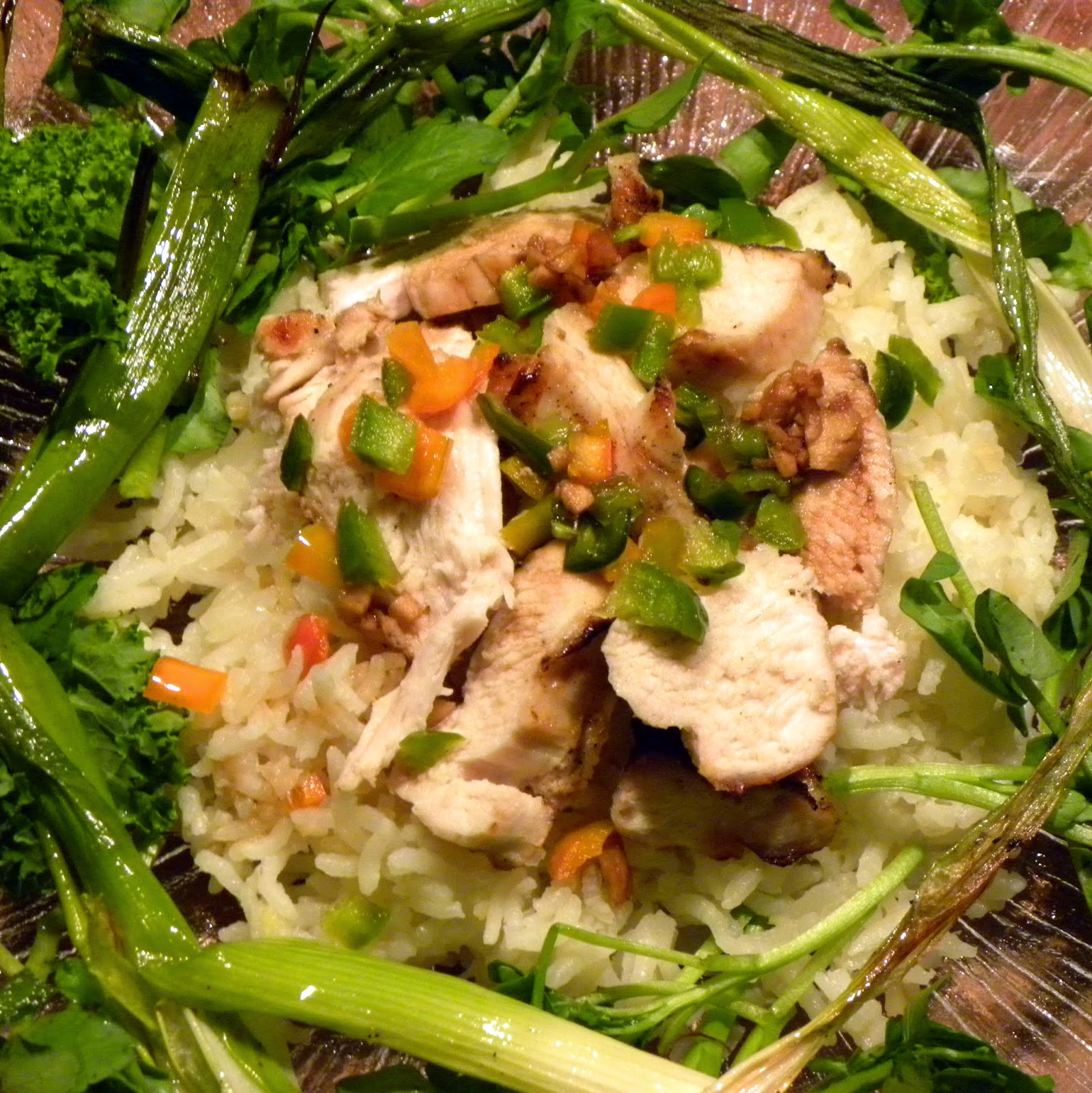 This recipe was given to me by Dan ("for your blog") who along with Alex had variations of Chicken Rice during a trip to Vietnam a few years ago.  I did the prep for Dan and Alex a couple of times in Oregon but last night was the first time I made this myself.  It is going to become a frequent dinner.  When Dan gave me the recipe, he listed ingredients but not quantities. At first I thought that strange but as I made the Chicken Rice I found that unlike a cake or other recipe that requires exact measurement, this is a recipe very much to taste.. hotter, not so hot; sweeter, not so sweet; heavy on the ginger, light on the ginger. 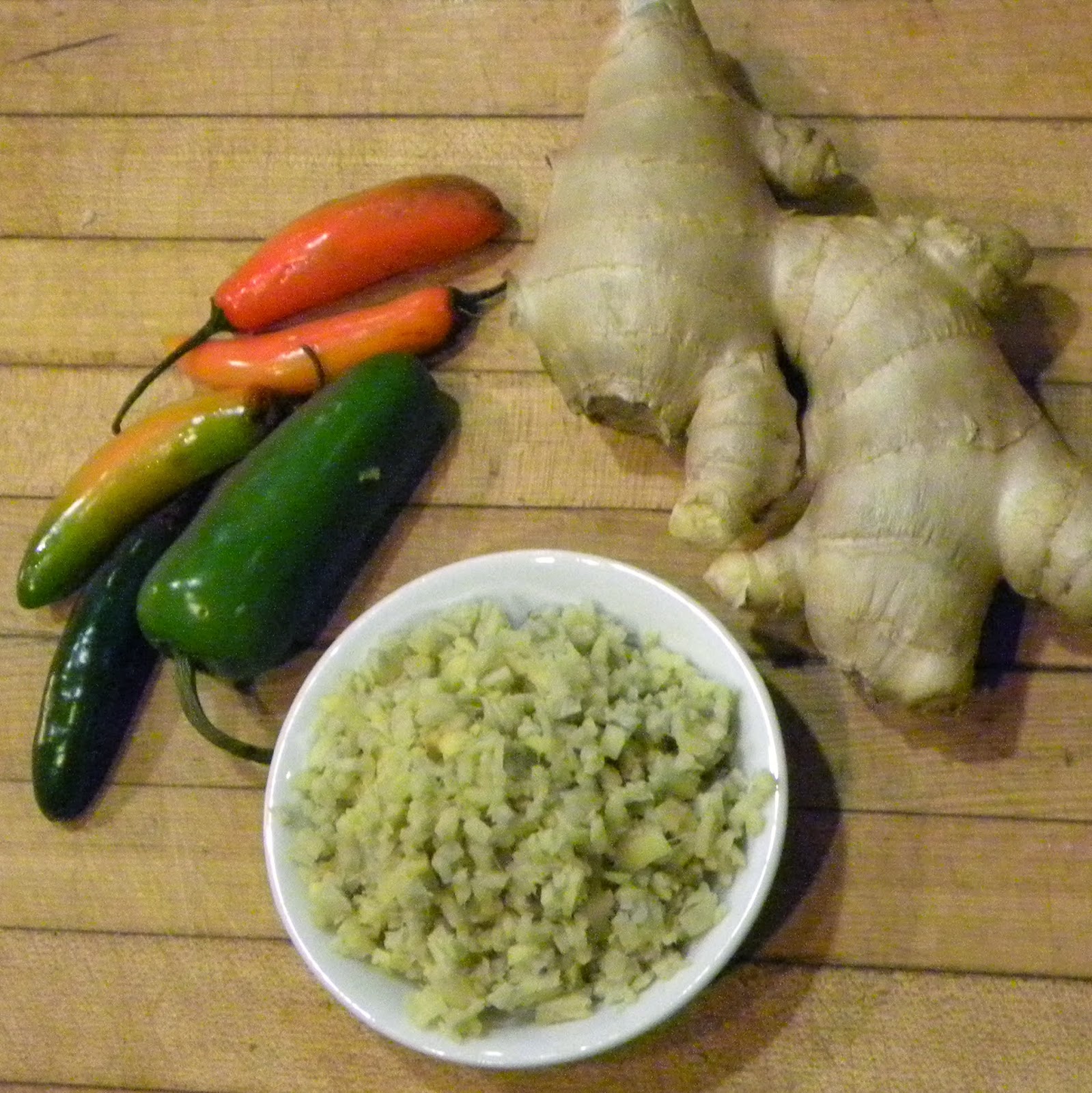 Since Dan, Alex and I all go heavy on the ginger, I have added ginger to make the title more descriptive.  I have given the quantities I used, but vary according to personal tastes and the hotness of the peppers used.

Dan's recipe (the "traditional" version) Calls for chicken thighs to be boiled until done, set aside to cool and then soaked in ice water for one minute. The stock is reserved for the rice.  For a less fatty version, Dan bakes and Ed  grills chicken breasts. 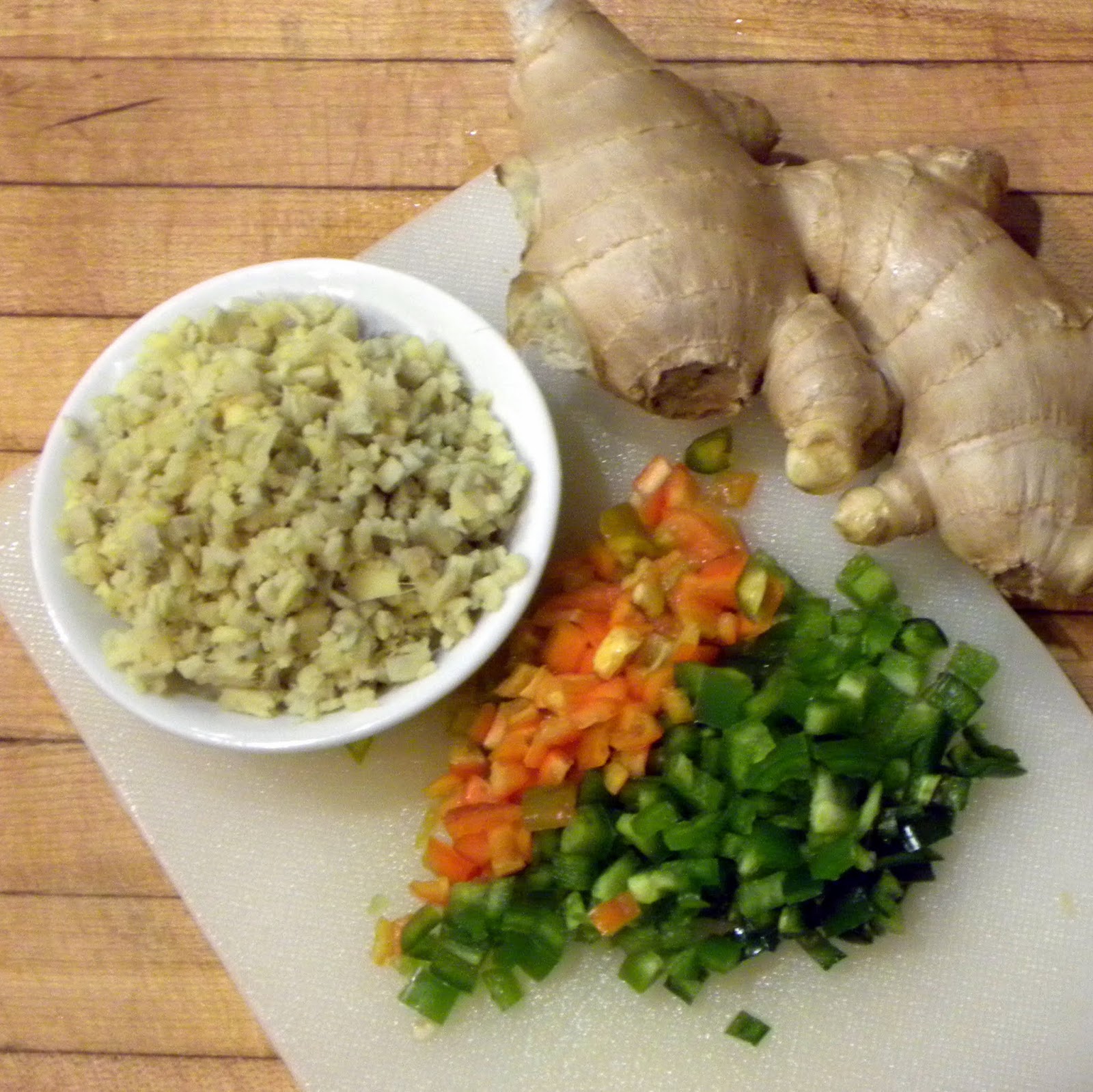 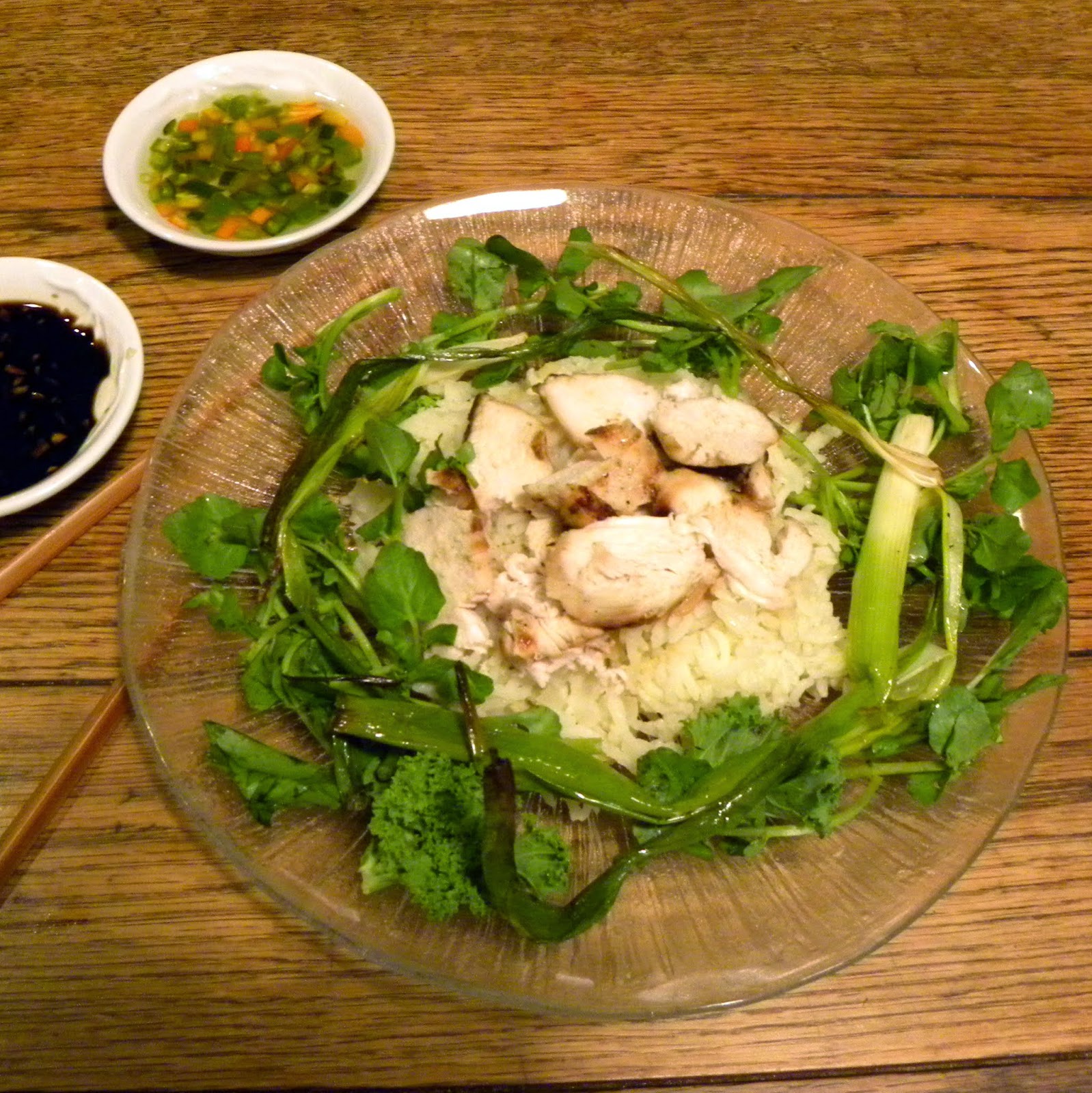 Finely chop the ginger, onions and peppers (ginger may be grated). [Put the vinegar and sugar in a small sauce pan and boil until sugar is dissolved]. Put rice, chicken stock, 2 T ginger and onion in rice cooker (or covered pan) and cook according to rice instructions. While rice is cooking bake or grill the chicken. 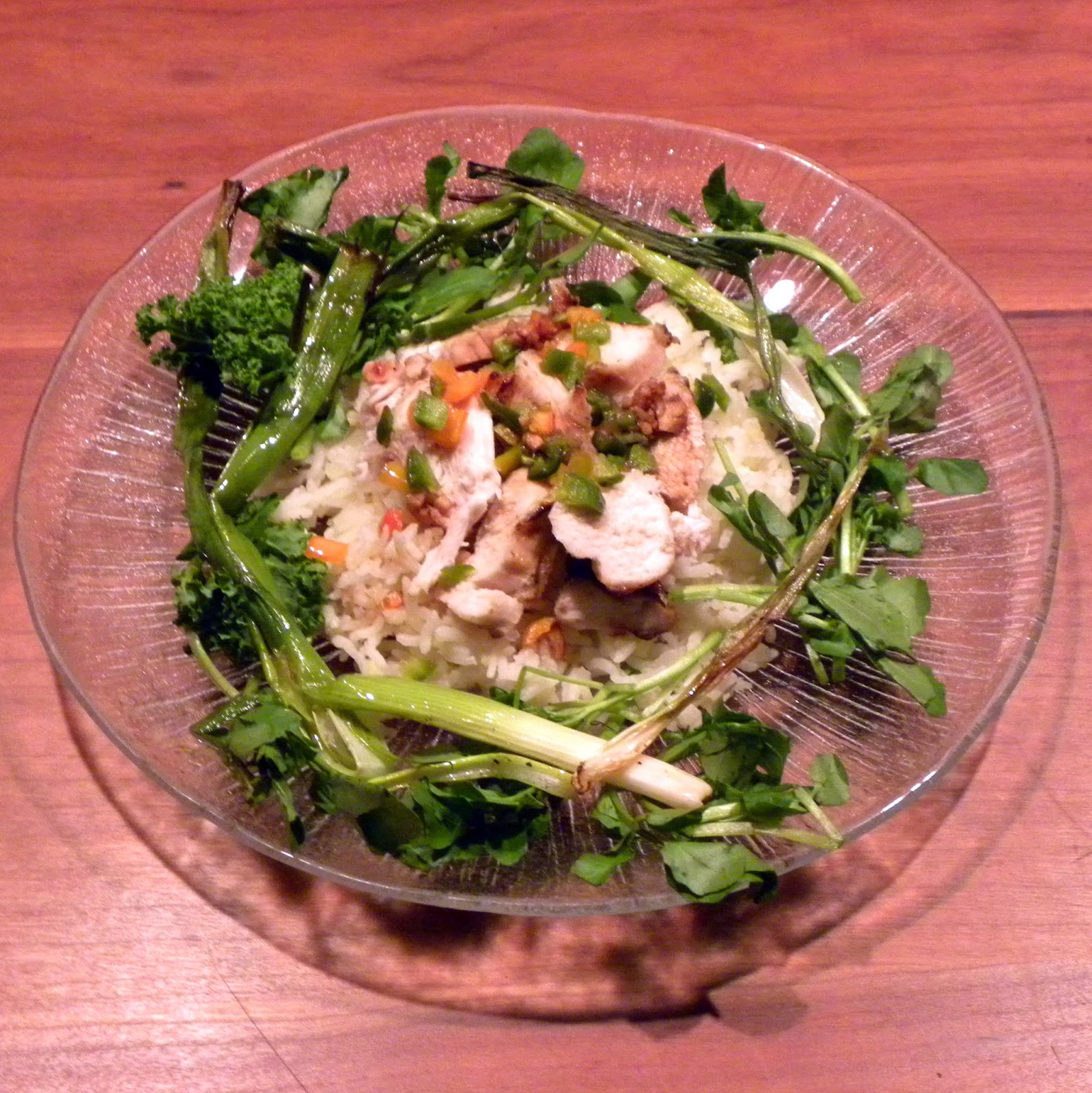 Mix peppers,vinegar and a surprisingly large amount of sugar in a ramekin, maybe some reserved stock. All to taste.  Serve chicken sliced into strips on top of rice. Use soy sauce [I added extra ginger] and pepper sauce for dipping.  [Just so Ed would "have more color on his plate" and a "salad", I garnished with grilled scallions, and a little bit of watercress and kale.  This dish, however, stands very well on its own and the peppers do add the requisite color.]

Yumm!  Thanks Dan and Alex!