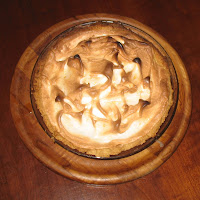 “When life deals you lemons, make lemonade”…but when a friend gives you Meyer lemons and tells you making lemonade with them would be a waste, what do you do? During a recent conference in Las Vegas the wife of one of Ed’s business colleagues gave me a big bag of Meyer lemons straight from her Berkley garden. After Las Vegas, we visited my Mom who likes pie, so coincidentally on 3/14 I tried to make my first lemon meringue pie. It came out pretty well except I didn’t “stir/whisk continuously” and when I returned from doing another step I found the milk mixture on the stove beginning to form a huge lump. Fortunately vigorous whisking solved this problem, but the lesson learned and reflected in the instructions below is to get all ingredients ready before starting to make the filling.

Also I made only a half recipe of Pie Crust and while this covered the pie plate shell it did not allow for a “pinched edge crust” --- probably not necessary, but if this finish is desired, make two thirds of a crust recipe. Alternatively make full recipe and refrigerate/freeze reminder for future use.

Note: When we returned home, inspired by a dinner in Las Vegas, I tried Meyer Lemon Risotto. While the pie was very tasty, I am going to use the rest of the lemons, making this dish.

MAKE PIE CRUST:  Line a 9” inch pie plate with crust and finish top edge neatly (half recipe) or crimp edges (two thirds recipe). Line pastry shell with buttered (crust side) aluminum foil and weight foil with pie weights, rice or a tightly fitting heavy pan. Bake in pre-heated 400 degree F oven for ten minutes. Remove foil and weights, prick several holes in bottom of the crust with a fork and bake for an additional 10 minutes or until golden brown. Remove from the oven and cool.

While crust is baking, separate:

into yolks and whites; put yolks in medium size (2-3 cups) bowl and whisk until fluffy; put whites in mixing bowl to later whip for meringue.

Remove and save zest from:

and then squeeze juice (approximately 1/3 c) into a small dish. Remove seeds and add pulp to dish.

MAKE MERINGUE: In another bowl with an electric mixer beat egg whites to which has been added:

until they hold soft peaks. Add in a slow stream:

Pour filling into pastry shell and spread meringue on top, covering filling completely and sealing it to pastry. Draw meringue up into peaks and bake pie in middle of preheated 350 degree F oven until meringue is golden, about 15 minutes.