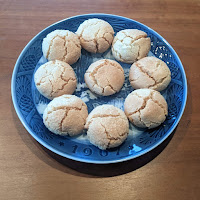 This year I was very careful to halve the nuts and sugar to make half of a recipe of Almond Paste to use for my Cranberry Stollen. Then I got to the egg, and, whoops, in went the whole egg white. Rather than waste what was in the food processor bowl, I added more nuts and sugar to make a full recipe of Almond Paste.  I figured I'd find a use for the extra paste after Christmas.  The first thought that came to mind was macaroons. I found a couple of recipes on-line that looked promising.    Actually not recipes, photos of ingredients and cookies but no quantities or baking temperatures or times. Minimal help. Then  I went to my trusty New York Times Cookbook (1950-1960 recipes from the NYT). Typical of that era, the recipe contained lots of sugar and correspondingly called for "3 egg whites, approximately" - "Use only enough egg white to make a soft 'dough' that will hold its shape when dropped from a spoon." Interestingly, one of the on-line recipes that gave only the quantity of egg whites warned, " Two large egg whites should weigh 60 grams. Using more or less will change the texture and spreading of the cookie. For best results measure the egg whites."  I reduced the sugar from one cup to one-quarter cup and used a small egg white (25 g).  I did not use any vanilla or almond extract as called for in some recipes I reviewed. I was delighted with the results (crispy on the outside, chewy on the inside),  as were two of my"testers".  The third "tester" weighed in at "pretty good!" but no comment for improvement other than probably making Nut Puffs instead.  The macaroons, however, have minimal sugar and no egg yolks or butter!

In a food processor bowl fitted with a steel blade combine:

Pulse until well blended. Remove from bowl and shape into small balls about 20 g each.  Place on a non-stick cookie sheet and bake at 350 degrees F/300 degrees F convection oven for approximately 20 minutes. Makes about a dozen cookies. Scale accordingly.