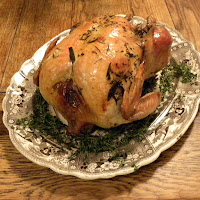 As of Thanksgiving 2016, I could count on one hand the number of turkeys I had cooked, the last one in 2008 and the one before that a very long time ago.  I've done Almonds, Cranberry Ice, and Creamed Onions most every year, an occasional Pumpkin or Pecan Pie (Chris and Alex now do the pies!) but seldom a turkey.

When I was a small child and we had Thanksgiving dinner as the noon meal, I heard my Mom say she had to get up really early to "dress the turkey".  Helpful child that I was, I got up even earlier and somehow managed to get the turkey out of the refrigerator (no cryovac bags in thoses days - Mom had already spent hours removing all the pinfeathers), and carefully "dressed" it with Kleenex. Last year's (2016) attempt was only a little more successful.  I got a rather large turkey, about 18 pounds I think, and used a recipe, How to Cook a Perfect Thanksgiving Turkey I found in the Boston Globe.  Think the failure was not caused by the recipe but (1) cooking the turkey closer to 180 degrees at the inner thigh, as I do with roast chicken, and perhaps buying too big a bird.  Ihe gravy makers objected to the lemons, put per recipe in the water under the turkey.  Think fresh herbs were a waste, as they did not stick as well as dried herbes d' Provence. Herbs were the least of the problem though as the white meat was very dry. Lessons learned: Do not wash turkey. Turkey is done at 165 not 180.  Don't mess to much with the "gravy base".

Soon after this turkey disaster I saw a recipe in the New York Times, How to Roast a Turkey. I filed it forThanaksgiving 2017.  When I was debating what size turkey to get that year Chris responded, I don't care about the size just don't have it dry like last year.  This sent me to an on-line search as to what causes roast turkey to be dry.  I found many references to size.  Apparently the larger the turkey, the harder to cook well, especially without a wet brine.  Many sources suggest cooking two 10 or 12 pound turkeys rather than one 20 to  24 pound bird. I then returned to Melissa Clark's NYT recipe, again front page and center in the New York Times.  Interestingly her recipe is for a 10 to 12 pound turkey and she uses a dry brine. I basically used this technique, leaving out some things (lemon zest, lemon quarters, cider and wine so as not to impact the gravy) and doing my own herb blend. 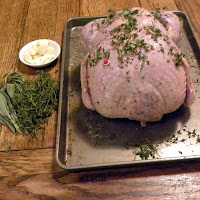 Tuesday night before Thanksgiving:
Remove giblets from the cavity and neck.  Dry (but don't first wash) the turkey with paper towels. Then rub the turkey all over with

fresh thyme/rosemary/sage (I'd almost say optional if turkey is going to be served without skin)
8 cloves garlic, smashed and peeled 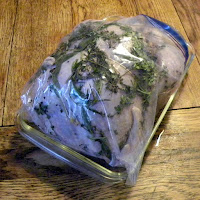 Put turkey with herbs and garlic  in a 2-gallon zip-lock bag. Seal, put in second plastic bag, and place on a rimmed baking sheet in the refrigerator. Turn bird over every 12 hours. 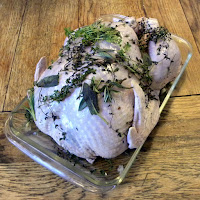 Thanksgiving morning:
Remove turkey from zip-lock bag and pat dry inside and out with paper towels. Return to the refrigerator, uncovered on the baking sheet, for at least 4 and up to 12 hours. This helps to crisp it. Again maybe not so important if not planning to eat skin. 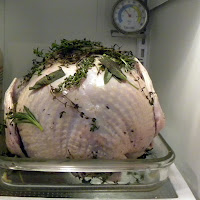 Remove turkey from refrigerator one hour before cooking.

Heat oven to 450 degrees F. Fill a large roasting pan with 1/4 inch of water (1/4 inch! I used too much this time and gravy had to be reduced for a longer than usual time) add

Stuff the dry turkey cavity with 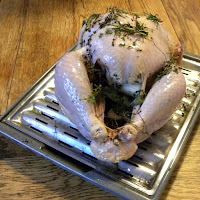 Tie legs together with twine.

Place turkey, breast side up, on a rack inside the roasting pan.  Roast for 30 minutes then cover the turkey with aluminum foil. Reduce the oven temperature to 350 degrees F and continue roasting until as instant read thermometer inserted in the thickest part of the thigh reads 165 degrees F. About 1 1/2 to 2 hours more.  Transfer the turkey to a platter and let rest for 30 minutes before carving.

THERMOMETER Lesson learned: Have an accurate, calibrated thermometer.  Chris once pointed out to me that it is ironic that we pay more for the meat we are cooking (each time) than for the thermometer (one time).  The remote thermometer I used seemed to calibrate well in boiling water but must not have been positioned correctly as it read 165 degrees F after a little less than 2 hours total cooking. I took the foil off and checked with an instant read thermometer and the bird still had 10 degrees to go in spots and the Bell and Evans pop-up thermometer had not popped. After opening (and cooling) the oven for several temperature checks I ended up cooking the bird 30 minutes at 450 degrees F and 2 hours and 45 minutes at 350 degrees F (or less as oven cooled with each opening.  The built-in thermometer had not popped when I removed the turkey from the oven but did in the half hour while the turkey was resting.  I think next year if I get a 12 pound turkey, I will plan on 1/2 hour at 450 degrees F and 2 hours at 350 degrees F  My day was made with Chris messaged me he was safely home and then, when I thanked him for the pecan and apples pies he brought he replied, "Thanks for the turkey. You cooked it perfectly!"
Posted by cookscache at 2:03 PM