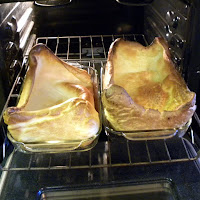 If cholesterol is no issue, it is hard to beat Baked German Pancake (right, photo at left, left, photo below) made with real eggs and butter for a weekend breakfast. Over the years I have tried a variation of this pancake using various brands of "egg product", some working better than others in achieving a puffy pancake. Recently the only "egg products" I was able to find were  boxed egg whites.  I searched for advice but could find no on-line recipes for puffy egg-white pancakes so decided to experiment. 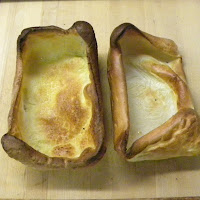 Mixing the ingredients together I became skeptical.  Instead of a golden yellow, I had a white batter (see bottom two photos).  What would the finished pancake look like?  Not to worry, the pancake was very puffy and golden brown!  (left, photo above, right photo at left) Of course not as rich tasting as the Baked German but quite delicious with warm maple syrup.  Next time, thinking of Alex's Almond Pancakes, I added some almond extract, a definate plus. 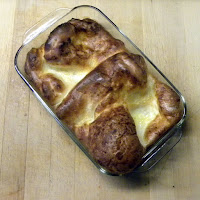 The third iteration (photo at left) was to use fresh egg whites rather than the boxed pastuerized egg whites.  I immediately noticed that the fresh whites have much more body than the boxed whites.* This was evident in the texture of the pancake too.  Not as much body and popover-like texture as the pacake made with whole eggs, but signifagantly more body and texture than the crepe-like pancake made from boxed whites. 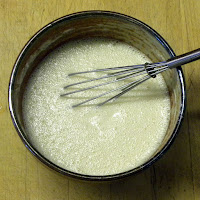 In a medium bowl combine: 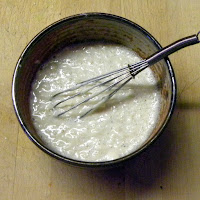 Put cast iron skillet (~9'' diameter) or glass pan  (~6' x 10"/~60" sq) in hot oven. When pan is hot add vegetable oil then return pan to oven until spread is melted but not burned!  Meanwhile beat ingredients well with a whisk until batter is smooth and bubbly. Remove pan from oven and tilt until bottom surface and sides are evenly coated with melted oil. Pour batter into pan and cook until pancake is puffed and brown, about 25 minutes.

Remove from pan, slice into servings and serve with warm maple syrup.