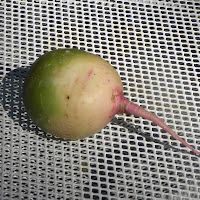 Still more new veggies to try - I found these at the farm stand this week. I'd never noticed Watermelon Radishes before so went on line to see if they are really new.  Apparently not, but maybe one of the vegetables from another culture's cuisine that is gaining traction in this country. The Organic Authority offers a good description of the Watermelon Radish: 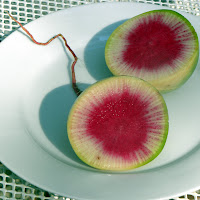 "The Watermelon Radish - so unassuming from the outside, resembling a parsnip - but slice it open to find a brilliant fuschia core that resembles that of, well, a watermelon. Also sometimes referred to as a Beauty Heart, Rose Heart, Shinrimei, Misato, Asian Red Meat or Xin Li Mei radish, the Watermelon Radish is an heirloom variety of the Chinese daikon. Compared to other radishes, expect these brilliant babies to be a bit milder and sweeter than regular, and much larger, averaging about three inches in diameter. Generally, their flesh is hotter toward the outside and sweeter toward the center, and they lose pungency as they mature (unlike most radishes). Crunchy and sweet, with just a hint of spice and a flavor,  this radish is reminiscent of jicama. But most of all - it's simply gorgeous!" 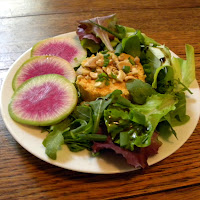 The watermelon radish almost justifies owning a mandolin.  Sliced very thin it would make an incredible garnish.  I used some slices to garnish a Carrot Cashew Salad.  Tasty, but not as visually appealing as they would have been thinly sliced.

Posted by cookscache at 4:25 PM

Email ThisBlogThis!Share to TwitterShare to FacebookShare to Pinterest
Labels: in season, salads, veggies