While I'm not crazy about traditional tomato and cheese pizza, I love more inventive pizza with thin crust.  Locally my two favorite pizza restaurants are Emma's in Cambridge (now closed, Boston location still open)  and Za, originally in Arlington and now also in Cambridge.  While I'd score Emma's higher on actual execution, I'd give Za extra points for tailoring their toppings to available local ingredients.  These seasonal offerings comprise the "chalk board specials" and are the inspiration for the following pasta sauce recipes. 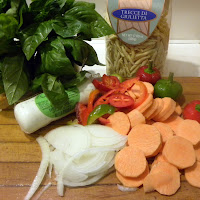 Last Sunday Ed and I went to Za's and shared "Kimball Farm's Peach, Caramelized Onion, Smoked Goat Cheese, Pickled Cherry Pepper and Basil" pizza.  I knew I could not duplicate the crust but thought this combo might also work well with pasta.  Just missed the local peaches (Za's in Cambridge has already replaced the peaches with apples) so I decided to use sweet potatoes instead.   While the sweet potatoes should be sauteed, the peaches should be added raw, just before serving.

When potatoes start to soften add:

Mix well and continue cooking until potatoes are just barely soft then add:

1 handful basil, coarsely chopped (or sage is a good alternative with sweet potatoes)

Stir until mixed then remove from heat. 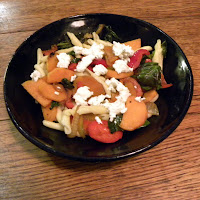 While veggies are cooking cook two servings of pasta according to package directions.  I had some  Castellana Trecce di Giulietta (the braids of Juliet), a summer gift, and used 1 cup (dry);  it was excellent. Penne or other shaped past would also be good.

Drain pasta, toss with veggie/fruit mixture and divide between two bowls. Top with

Omit sweet potato and follow above directions cooking until onion and peppers are barely soft, with the basil add:

Stir until mixed and continue following instructions above. 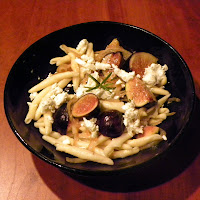 
Another pizza we have recently enjoyed at Za's is "Black Mission Fig, Caramelized Onion, Gorgonzola, Fresh Garlic, EVOO, Truffle Oil and Parsley". Again, I tried a pasta variation modified according to ingredients on hand, substituting goat cheese for Gorgonzola and fresh rosemary for parsley. 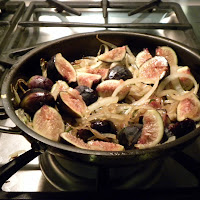 When onions  start to soften add:

Stir until mixed then remove from heat.

Posted by cookscache at 9:01 AM