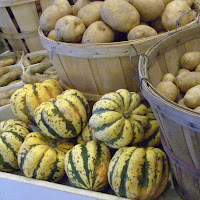 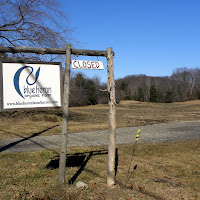 Ummm.... Not much local this month except celaric, several kinds of potatoes and a green and pale yellow striped squash I've never noticed before.  It's amazing when the selection gets small enough and the same enough how something not previously noticed will jump out. I asked. It's called carnival squash and the tender skin is supposedly edible. Sounded different, maybe even good. Stay tuned. 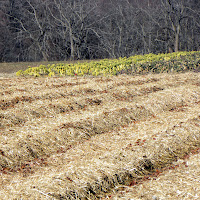 This month's selection looks like last's but more limited, and here in the Northeast nothing locally grown (outside a green house) will be available in March that is not already available in February. In fact, some of February's dwindling stores will be depleted come March.   Given the sameness of selection and no holiday food to celebrate either month,  I'm doing what Barbara Kingsolver does in Animal, Vegetable, Miracle: A Year of Food Life; she starts with April and ends by lumping February and March together.  In Chapter 19 HUNGRY MONTH: February - March, Kingsolver writes:

"As I grow older, more of my close friends are elderly people. I suppose I am auditioning, in some sense to join their club. My generation will no doubt persist in wearing our blue jeans right into the nursing homes.... But I do find myself softening to certain features of the elder landscape. Especially, I'm coming to understand that culture's special regard for winter. It's the season to come through. My eighty-four-year-old neighbor is an incredibly cheerful person by all other standards, but she will remark of a relative or friend, 'Well, she's still with us after the winter.'"* 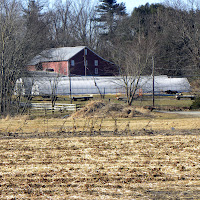 Kingsolver goes on to describe the perils of winters past when bitter cold, limited diets, and lack of immunizations and antibiotics took a toll on young and old alike.  Then continues:

"Tying my family's nutritional fortunes to the seasons did not really involve any risk for us, of course. But it did acquaint us in new ways with what seasons mean, and how they matter.... I watched the rank-and-file jars in our pantry decline from army to platoon, and finally to lonely sentries staggered along the shelves. We weren't rationing yet, but I couldn't help counting the weeks until our first spring harvests and the happy reopening day of the farmer's market. I had a vision of our neighbors saying of us, 'Well, they're still with us after the winter.'" ** 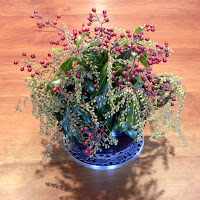 While I still like winter and look forward to cross-country and alpine skiing if there is sufficient snow and trail hiking if there is little snow, I am beginning to think about asparagus. Armed with my flu shot and car to drive to the nearest market, I am not living a Kingsolver experiment or a Little House on the Prairie existence, but I am looking forward to going to the local farm stand/farmers market and seeing more than root veggies.  We just pruned our Andromedia so we have plenty of greens for a centerpiece, but I'm looking forward to daffodills. March 21st is the turning point, the days will then be longer than the nights, and first spinach and daffodills won't be far behind. As Kingsolver describes planting seedlings under indoor lights, she writes of March, "If it's not the end of the winter, you can see it from here."***

Email ThisBlogThis!Share to TwitterShare to FacebookShare to Pinterest
Labels: commentary, in season