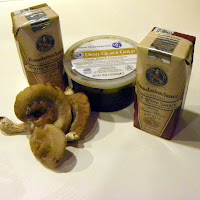 Introducing some new items that have just found their way into my kitchen. My brother, Jason, has long used More Than Gourmet products, particularly their Demi-Glace Gold.  He gave Chris a 16 oz container of this for Christmas and me several containers of the Red Wine Sauce and White Wine Sauce. I have used some of the White Wine Sauce to make Chicken and Wild Mushrooms Supreme . In making this recipe I used 1 t fresh thyme instead of dried thyme, substituted lemon juice for cream and served over Trader Joe's Lemon Pepper Pappardelle Pasta instead of in pastry shells. For my taste the recipe is a bit heavy on sauce (I used 1/3 container for 10 oz of chicken) but that's what More Than Gourmet is selling.

Chris immediately used some of his Christmas present to make a mushroom-onion demi-glace which he served over a dry aged sirloin strip.  He posted photos (inculding the ones at left) on Google+ (and gave me permission to use them here). The ratio of demi-glace to hot water is 1:4 as noted on the container. Chris made the roux from flour and butter, using equal parts by weight, but it seemed too thick to him so he added more butter. Jason, the demi-glace pro's advice is, "Do it by feel".   Alexandra saw Chris's post and photos and convinced Chris to make this when we were together last week.

Prior to Chris's arrival,  I ordered the Demi-Glace Gold from Amazon Prime (didn't spring for the overpriced 1.5 ounce packages at Whole Foods and elsewhere).  When it arrived I was amazed to discover that the label lists only 0.5 g of fat per 2 t (before water is added) serving; the cholesterol comes from the butter in the roux. Chris made a demi-glace like he had made in New York and it was awesome.  I used some of the leftover demi-glace on some mashed potatoes and cod (see below) a few nights later.  It too was very tasty, and I began to ponder how I might make a healthier version of this.

For a long time I have used Stonewall Kitchen's Mushroom Sage Steak Sauce (this sauce is no longer available) with additional sauteed mushrooms to accompany steaks and with caramelized onions and mushrooms over cod. The Demi-Glace Gold would be a tasty, less expensive alternative and if I used an olive-oil roux, it also would contain no cholesterol. 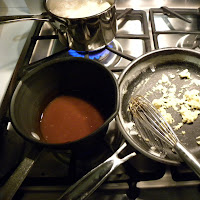 Whisk together, then simmer, about 6 minutes, until well mixed: 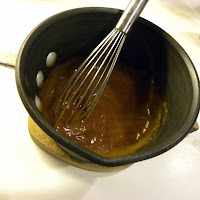 In a small skillet brown

Stir constantly until it is slightly golden then whisk in

Whisk constantly until flour and oil are well blended, adjust quantity "to feel." Then whisk enough roux in with the demi-glace to achieve the desired thickened, smooth consistency.  Add mushrooms and/or onions if desired (see below).

Chris sometimes complains I serve mushrooms with sauce over steak rather than mushroom sauce and admonishes, "Don't put in too many mushrooms."

When Chris made Mushroom Demi-Glace last week he used a big cup each (actually about 1 1/4 c each) of finely chopped mushrooms and onions and 1/3 c Demi-Glace Gold.  For the recipe above that would translate to

Sautee mushrooms and onions in 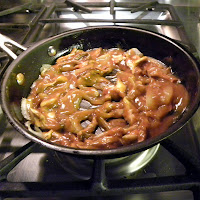 Follow the recipe for Cod with Carmelized Onions and Mushrooms but instead of using Stonewall Kitchen's Mushroom Sage Steak Sauce use Demi-Glace made with Olive Oil Roux (photos left and below).

Note: When using demi-glace on cod/other similar fish such as hake, I prefer to make basic demi-glace then follow instructions in cod recipe and leave onions and mushrooms in thin slices. 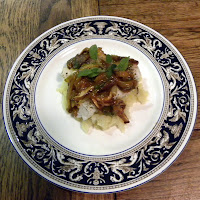 Posted by cookscache at 9:58 AM