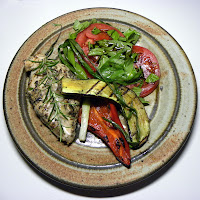 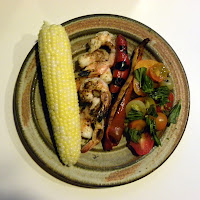 In early September we savored the corn, tomatoes, basil and peppers that were so bountiful at our local farm stands. Ed and I then took off for Spain where we enjoyed among other things more tomatoes and figs that were in full season as well as blackberries that we picked along the hiking trails.

Stay tuned for future posts on tapas surprises, a very special evening at La Oliva in Granada, and hiking and dining in the Alpujarra and Sierra Nevada. One thing I took away from this trip is that the Moorish-Spanish/European fusion found in Andalusia applies not only to architecture (Mudejar) but also to food. Starting with notes from the dinners we had at Las Chimeneas in Mairena, Nevada and the reading I am doing in Sam and Sam Clark's  (Moro) cookbooks, I hope to further explore this hybrid in my own kitchen in the months ahead. 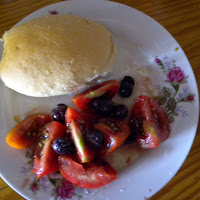 Olives and "black" tomatoes fresh from the barkeep's garden served as tapas at a small restaurant/bar in Mairena.

September 2017:  The closest to "black" tomatoes I have been able to finlocally are the Black Prince tomatoes  which are dark green on the outside but as the tomatoes in the photo, red inside.  These have been our favorites for several years 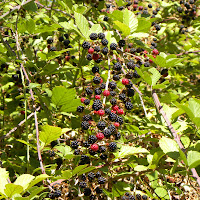 Email ThisBlogThis!Share to TwitterShare to FacebookShare to Pinterest
Labels: in season, travel/places