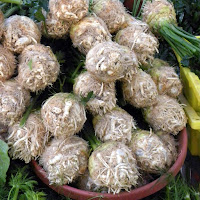 We spent part of October on the West Coast where Alex and Dan introduced us to a new (for me) fall veggie - celeriac, or celery root. We bought it at the Portland Farmer's Market and Alex prepared it much like mashed potatoes: peeled it, cut it into chunks and then boiled it until it could be easily mashed using a potato masher. Finished with salt and pepper and a bit of butter or olive oil, it is an interesting substitute for mashed potatoes. I've since found it at our farm stands, and used it instead of potatoes when making Cod with Carmelized Onions and Mushrooms. 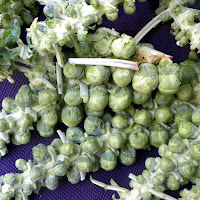 At the Farmer's Market we also got a stalk of Brussels sprouts, abundant in the East this month too. 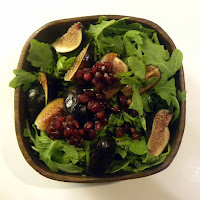 Although not local to New England, I look forward to figs which, unlike many fruits and vegetables, are only available to us for one short season.  In addition to using them as a garnish on Almond Olive Oil Cake,  I top local fall arugula with figs and pomegranate seeds and dress with just a bit of very good quality balsamic vinegar. 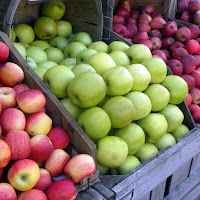 October is also apple month. Now that Alex and Chris are grown, we no longer make the trek to Harvard, MA to pick apples but rely on the local farm stands that offer an ever increasing variety of apples - one stand boasting "19 kinds of apples". It was particularly fun shopping for apples at the Portland Farmer's Market where vendors offered tastes of the various varieties. Interestingly, one variety that Alex had found sweet and crisp the previous week was not so tasty when we sampled it the following week. Time for Apple Raisin Muffins and Apple Tart and later in the month as cranberries are harvested, Cranberry Apple-Crisp. 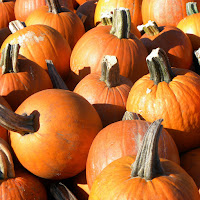 And the pumpkins.... For recipes see Pumpkin Time Again.