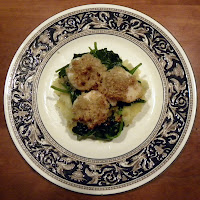 When I was in Portland (OR) in April, Alex and Dan took me to an awesome Peruvian restaurant, Andina. I had what was described in the menu as "Quinoa-crusted diver scallops perched on top of wilted spinach and a potato-parsnip puree, with golden beet and crabmeat 'cannelloni' and a duet of red beet and passion fruit reductions." Really good. The Andina served 3 individial scallops in a line on a long narrow plate, each on a bed of puree, then spinach, then the scallop with the 'cannelloni" looking like an elongated corn chip stuck beside each of the scallops. The reductions were artfully drizzled on the plate. When I returned home I attempted a much simpler rendition for Ed (sans 'cannelloni' and reductions and using a simpler plating mostly because I do not have any long narrow plates).

Wash and cut into small chunks:

Put in a saucepan with water and cook until tender approximately 20 minutes (check frequently after 10 minutes and do not overcook!).

While potatoes are cooking wash and dry:

Place on a baking sheet and put in oven preheated to 450 degrees. Bake 4-5 minutes, depending on size of scallops. Turn scallops over and top each scallop with 1 T of:

Return scallops to oven and cook additional 4-5 minutes until quinoa is browned (use broil setting the last minute or two if necessary to brown the quinoa); scallops should be opaque and slightly firm with a bit of bounce and resistance when touched, not mushy.

While scallops are cooking sautee:

When potatoes and parsnips are tender, remove from heat and mash well with potato masher or immersion blender

Place half of the mashed potatoes and parsnips on each of two warmed plates, flatten a bit and top with half the spinach then 3 scallops.

Garnish with lemon zest and serve with a lemon wedge.

Posted by cookscache at 2:19 AM