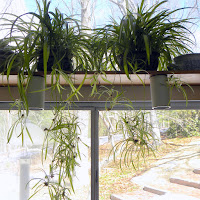 While this blog is about food, it's roots are in family recipes and family holiday traditions, mostly food but occasionally plants make it into the mix. Mother's Day is more about plants than food. The earliest Mother's Day plant I can remember is a tiny spider plant that Alexandra brought home from Mrs. (Lee) Brown's nursery school class. Three years later Christopher, then in Mrs. Brown's class, brough me a similar plant in a similar small paper cup. Somewhere in between came the Viburnum Tree (orchestrated by Ed) that we all planted together and still blooms in our yard each spring. 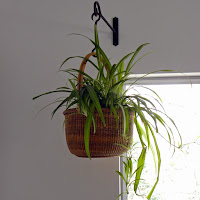 While these plants share the longevity prize, the spider plants are hands down winners of the profileration prize.  After having had many more, I'm down to three large spider plants in Lincoln and Chris has a similar number in Somerville by way of Brooklyn.  We still have one big spider plant in Colorado and there are a couple in New Hampshire. 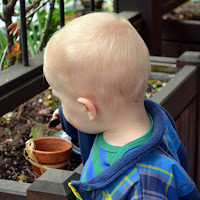 This year I took  a tiny offshoot to Oregon. Henry, who I think is destined to be a gardner or at least a mulch spreader, had fun planting it as a Mother's Day gift for Alex.  We are now in the real second generation of spider plants! 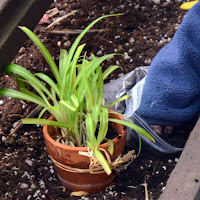