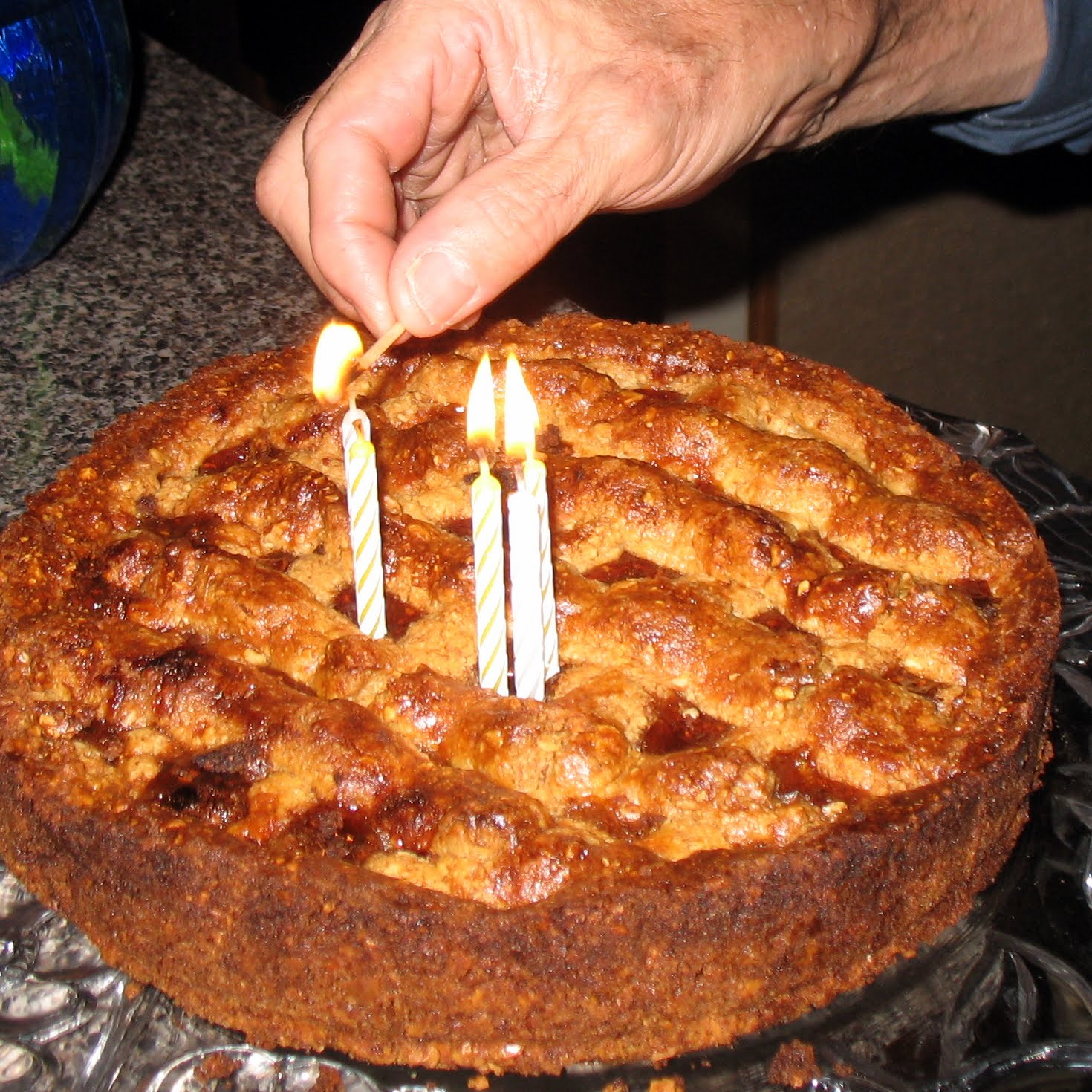 For many years I had thought of Linzertorte as the almond crust, raspberry preserve filled torte I make for holidays and Chris's birthday. Then, when Chris made a Cranberry Linzertorte for Thanksgiving and I noticed variances in ingredients and technique, I began to think of Linzertorte in general. 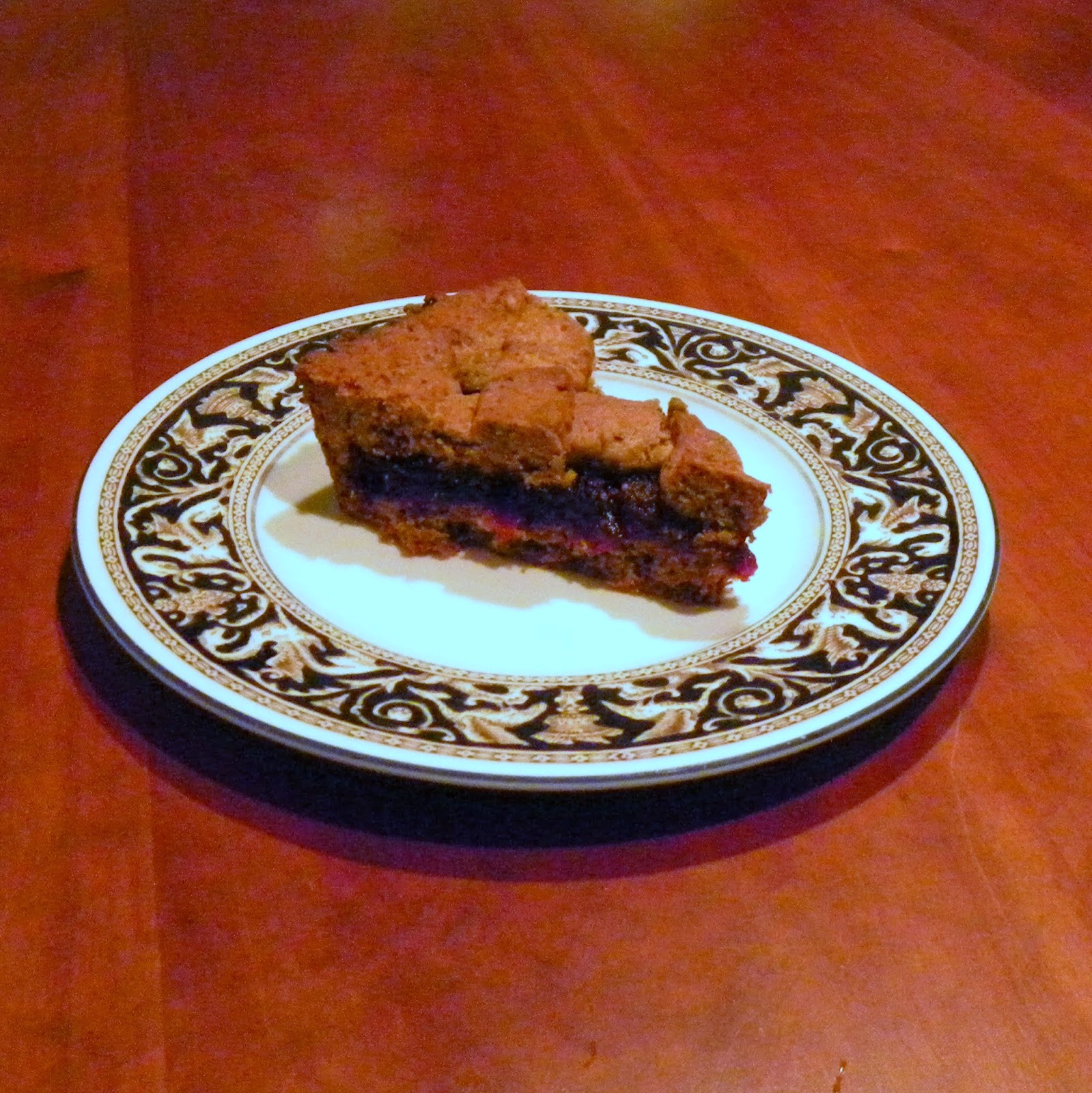 My first stop was Kaffeehaus by Rick Rodgers, an excellent source of classic Austro-Hungarian pastry recipes, including the Sachertorte.  The Sachertorte and Linzertorte are two of Austria's most famous desserts, the latter named for the city of Linz. Rodgers writes,

"The exact origin of the Torte is not known.... The first printed recipe dates to 1719, and it contains the flour, almonds, sugar, egg yolks, and lemon zest that can still be found in today's version. During the Biedermeier period [~1815-1848], the Linzertorte was popularized by the Linz baker Johann Konrad Vogel, who boasted unconvincingly that he was its inventor"*

Rodgers goes on to describe what he considers the three essential variations of this torte, "The first two are based on a short crust dough, in which the butter is cut into the dry ingredients. 'White' Linzertorte is made from blanched almonds. Cocoa (or chocolate) and toasted hazelnuts (or unskinned almonds) give 'Brown' Linzertorte a darker color and deeper flavor. 'Creamed' Linzertorte... uses the same ingredients, but the butter is creamed, making the dough soft enough to pipe the lattice pattern on the torte, sometimes almost completely covering the preserves."*

When it comes to filling, Rogers states in Austria "the dough is usually filled with black currant preserves (raspberry preserves are used only in other countries like America, where they are cheaper than currant), but even that isn't a constant and changes from baker to baker."*

Rogers includes a recipe for Brown Linzertorte* which calls for a dough made with
toasted and peeled hazelnuts ( 7 oz), 1 T cocoa , zest of 1 lemon, 1/2 t ground cinnamon, 1/8 t ground cloves,1/4 t salt and 1 T lemon juice along with the flour (1 1/2 c), sugar (1 c), butter (14 T ) and 2 egg yolks. He uses a nine-inch spring form pan, lined with buttered parchment paper, He divides the dough into two discs, wraps the discs in plastic wrap and  and referigerates until firm, at least an hour and up to overnight. The dough (one disc) is pressed into the bottom of the pan and up 1 inch on the sides,  about 1/4 inch thick overall. The shell is brushed with beaten egg white and cooked for about 15 minutes at 350 degrees F.  The recipe calls for a filling of  1 c of black current, red current or seedless raspberry preserves. The dough for the lattice is rolled and cut with scraps used to form a ridge around the perimeter of the torte.  The lattice is brushed with a mixture of one egg yolk and 1 T milk. He garnishes the torte with 3 T of sliced almonds before baking. 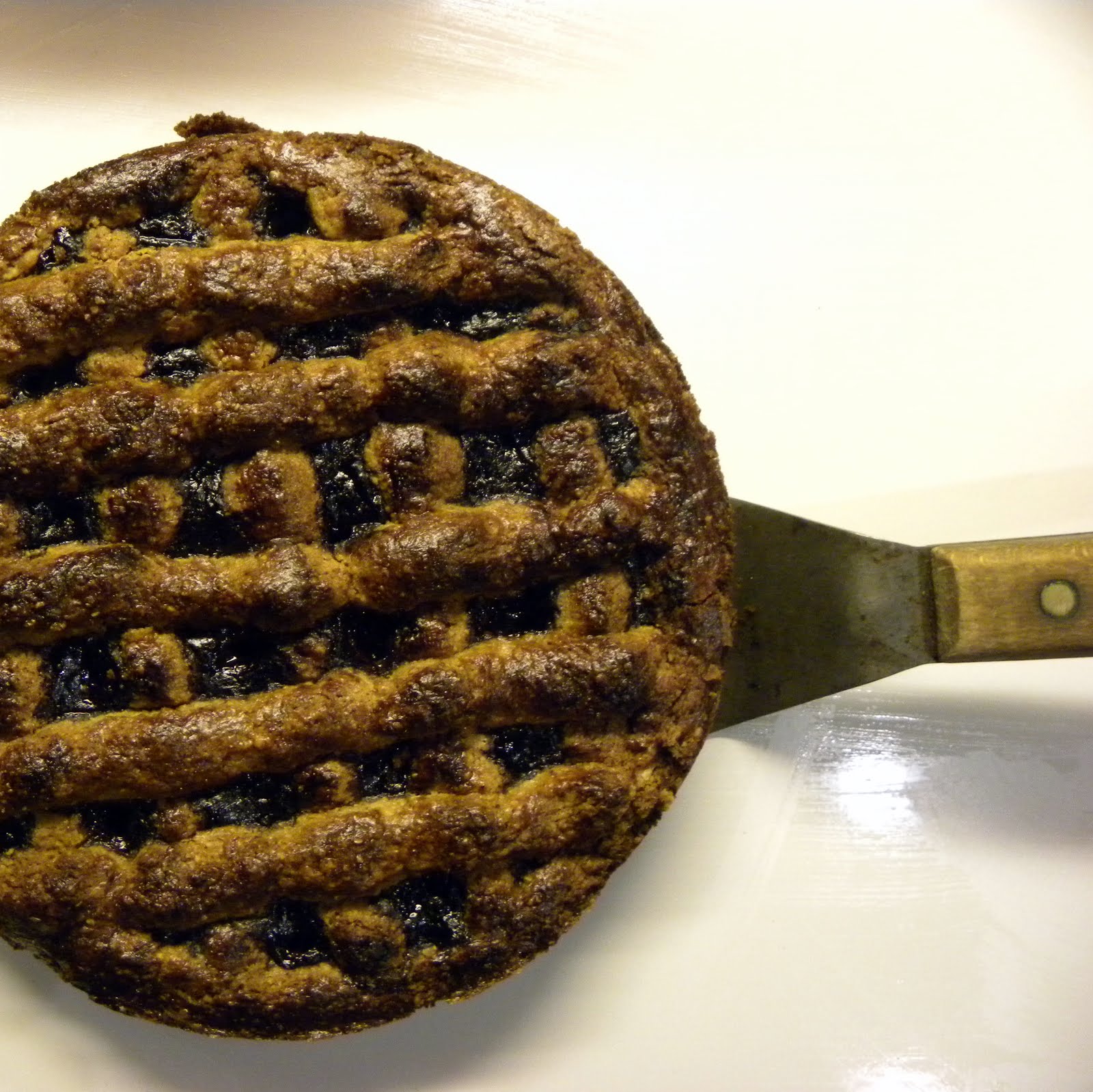 The Cook's Cache recipe, adapted from the New York times recipe must also be considered a brown torte as it calls for almonds with skins, but not toasted.  It also calls for a springform pan which I line with buttered parchment paper but does not call for pre baking  the shell. The filling is 1/3 (NY Times) - 2/3 cup (my adaption)  raspeberry preserves, preferably with seeds and the lattice is individually rolled ropes not cut strips (see photos).  The lattice is brushed with beaten egg white before baking.


The Silver Palate Cookbook  Linzertorte recipe**  is a "white Linzertorte" made with blanched unroasted almonds as well as a "creamed Linzertorte" directing the maker to "squeeze out a lattice crust on top."  The pan of choice is a 9-inch false-bottom tart pan, unlined, and the preserve, raspberry. (2/3 cup)

In How to Cook Everything, Mark Bittman's Linzer Torte recipe*** calls for blanched, toasted almonds and an  8- or 9-inch tart pan.  The dough is rolled and prebaked then filled with raspberry preserves (1 1/2 cups).  He gives good directions for making a lattice using rolled dough.

I once, pre-blog, so no photos, made a Linzertorte using the recipe from  Cold Weather Cooking. Sarah Leah Chase's Chocolate and Apricot Linzertorte recipe**** called for lightly roasted and skinned hazelnuts and cocoa in the crust and an  apricot filling (made with apricot preserves, dried apricots, orange juice and Grand Marnier). Replacing "our" traditional almond crust and raspberry filling with a chocolate crust and apricot filling was considered heresy by my family. However, it definately falls within the parameters of a Linzertorte. For the record, the recipe calls for an 11-inch tart pan with a removable bottom, pre baking the bottom shell, rolling the dough for the lattice and brushing the top before baking with beaten egg whites.

The Joy of Cooking Linzertorte recipe***** calls for unblanced almonds and a good quality raspberry jam, preserves or apple butter.  It is a creamed Linzertorte with the lattice made by forcing the dough through a pastry tube. Only pan instructions are to use an  [9-inch] ovenproof dish.

Unable to find a recipe for Linzertorte in The Smitten Kitchen Cookbook, I went to Deb Perelman's blog where I did find a recipe for linzer torte . This recipe is in fact a double quantity recipe making 2 9"-inch round, 2 8-inch square or one 9-inch by 13-inch torte. The rectangular tortes are cut into bars not wedges.  Ms. Perleman uses walnuts and a raspberry jam plus breadcrumb/panko filling (1 cup jam/torte), rolls the lattice, brushes the top before baking with a mixture of egg yolk and water and tops with slivered almonds before baking. 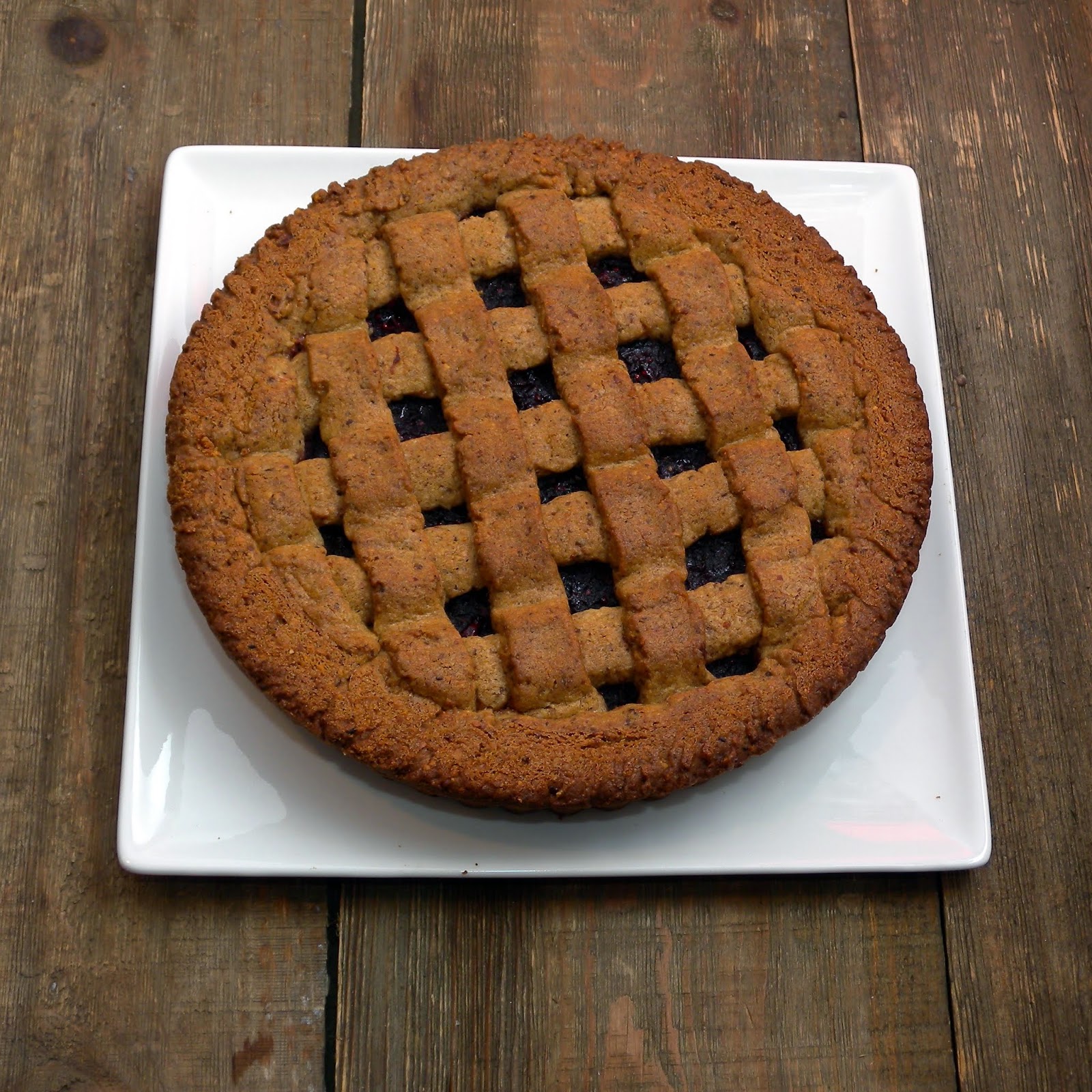 And now back to the Cranberry Linzertorte that started this whole discourse.  This recipe calls for roasted almonds and hazelnuts, the latter skinned after roasing and a cranberry filling (with orange jiuce and orange zest).  It calls for a tart pan with removable bottom and lattice made from rolled dough.


The takeaway for the recipes I reviewed:  Linzertorte (or less frequently used "linzer torte") can be made with a variety of nuts, roasted or not roasted, skinned or not skinned and filled with a variety and varying quantity (1/3 cup to ~ 1 1/2 cups) of preserves.  Pans with removable bottoms are preferred and a tart pan is most frequently used . Bottom crusts are sometimes pre-baked and the lattice most often cut from rolled dough.  The top is sometimes brushed with beaten egg white or beaten egg yolk and water before baking.  The Linzertorte recipe I use is an outlier being the only recipe  that uses individually rolled pieces for the lattice, I am going to try rolling the lattice next time.  I am also going to try using a tart pan with a removable bottom instead of a spring form pan.