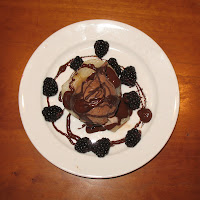 If you've had this dessert before or seen it on a menu and wondered where the Helene came from, here is the definitive answer compliments of Wikipedia:

"Poire belle Hélène (German: Birne Helene) is a dessert made from pears poached in sugar syrup and served with vanilla ice, chocolate syrup, and crystallized violets. It was created around 1870 by Auguste Escoffier and named after the operetta La belle Hélène by Jacques Offenbach.Simpler versions replace poached pears with canned pears and crystallized violets with sliced almonds." 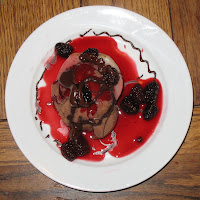 All news to me. I've always thought of Pears Helene as half a poached pear with vanilla ice cream, raspberries and chocolate sauce on top in that order.... Hmmmm, maybe I'm confusing peach melba. At any rate, here is a dessert I made recently using Stonyfield Farm After Dark Non-fat Chocolate Frozen Yogurt - not as rich as ice cream but the best non-fat yogurt I have found.

1 fairly hard pear (for each 2 persons to be served)

Place in a sauce pan with water to cover (~1 cup per pear) and add per cup of water:

Bring to boil then add pear(s) and simmer 2-3 minutes or until pear is easily pierced with a fork. Remove from heat and cool to room temperature.

When ready to serve, remove pear halves from liquid and place each half center side up on a dessert plate. In a small dish place:

Microwave on high for 30 seconds then stir. Check and  stir at 30 second intervals until chocolate is smooth. Be careful, if a small amount of chocolate, check more often. It will burn!

Top each pear half with:

HINT: If you melt chocolate frequently (as for dipping strawberries when they are in season), or Dark Chocolate Drizzle, of which this dessert is a variation, cover and leave the small bowl used to melt the chocolate with any unused melted chocolate in the refrigerator.